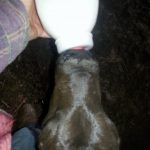 Not as in a milk cow but a calf named Milk Cow.

An old cow had a set of twins. It’s a rare cow that will keep track of both and have enough milk for them both, this was not one of those rare cows. I had been watching the calf for a couple of days. She wandered around the corral bawling for her mama and trying to nurse all the other cows. It wasn’t working very well.

Finally this morning, after days of being bugged about it, the Father-in-Law called and said she was laying outside the fence again, still no mom, did we still want her? I did! We had talked about getting The Goblin Child a bottle calf, me enthusiastically, her father with great doubt and trepidation. Yes, I realized that I would end up being the one to feed it. But I would also keep it, or sell it, in the end, so fairs fair.

So we went and picked her up. She rode to the barn in the back of the pickup, held by my long suffering husband who never wants anything to do with cattle and still gets stuck helping with these things constantly. On the ride home we asked The Goblin Child what she wanted to name it? After vetoing Onna, because we can only have so many of those, she decided on Milk Cow. We thought it was quite fitting.

In the barn she refused her bottle of milk at first, despite being hungry for days. 8 was terrified of her bawling and The Goblin Child didn’t want to get near her. We went inside, regrouped and tried again later. These things take a while to figure out. Next try she was starving. Wolfed the whole bottle down and wanted more.