In Honor Of Halloween, My Favorite Poem

Category: Uncategorized | 2 Comments on In Honor Of Halloween, My Favorite Poem

The legend of sleepy hollow is my all time favorite. Both the old cartoon which is the measure by which all other versions are judged and the newer movie with Johnny Depp. I spend lots of time trying to convince the children we should watch it. Again. My greatest sorrow was in realizing Brom was short for Abraham  after we had already named our youngest child. Ichabod was ruled out as a name for obvious reasons as well as it’s sad meaning but Abraham we could have done. I suppose legally changing his name would be going a bit far.

I wanted more movies like Sleepy Hollow. Not scary but with the full beauty and ambiance of fall, the history, horses would be asking a little much but would be nice. So my always dedicated husband searched.

He found The Others. It had the ambiance, the history, no horses unfortunately. It was pretty good, there was only one problem. Unlike Sleepy Hollow it was scary. I could handle it though, if only because I had my husband to hide behind. By the end I was ok with it and did really like it and no nightmares.

The we watched The Woman in Black. I think he forgot the not scary part of my request. I really do hate ghost movies. This was just dark, terrifying, I didn’t watch it, with my phone held in front of my face the whole time trying to ignore it except for the times I couldn’t and peeked. Many times he warned me to be sure not to look. They added really unnecessary elements like stuffed monkeys and dolls, things that completely creep me out, aside from the ghost its self. On the bright side there was at least one horse and the scenery was beautiful.

Now Halloween is upon us and, as I am ready for Christmas music, it is unlikely we will continue our search for other great Halloween movies this year. That does leave plenty of time for next year though.

The Bugs Of Our Lives 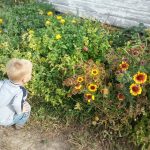 8 stood looking in fascination, still and watching for a whole moment at a time. He had found a moth enjoying flowers still not yet frozen. As he watched another joined the first and a huge bumble bee buzzed loudly past. We watched and talked about butterflies and how bees are owie bugs. The moths were quite docile, nearly allowing 8 to pet them. We have a bit of an obsession with bugs around here, bugs and spiders. I’ve mentioned our pet spiders, Charlotte, Moxie and Eatith, but I haven’t gotten around to our bugs yet.

This has been a good summer for learning about bugs. We got to see a freshly hatched cicada, and found it’s skin recently shed. I found a lady bug pupa on the leaf of a pepper freshly picked from the greenhouse. Ladybugs are our friends, I carefully saved it and set the leaf on the back porch. The next day I thought how strange it was that a ladybug had stopped to visit the cocoon. When it was still there in the afternoon I looked closer and realized it was a freshly hatched Ladybug from the pupa.

The Goblin Child even tracked down the sound of a crickets song. The cricket sat and continued its song as we watched in fascination.

The Joys Of Doing Dishes With Children

I turned away from the sink to take care of something in the microwave. Back at the sink 8 had been “helping” clean. Water was splashed across the floor, clean dishes were returned to the sink and the job was taking much longer than usual. With my back turned I heard glass clanking and the chair scrape as he climbed down.

Turning back to the sink I found a beautiful waterfall. Created and left. Enjoying the creativity, and happy that he had left, I took a picture then returned to cooking supper realizing later that I forgot to shut the water off. 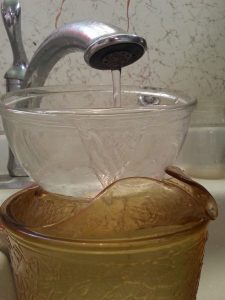 Getting Ready For Halloween

Halloween costumes are done. The yard is decorated and the pumpkins carved. we are prepared.

It is long standing policy in our house hold to let spiders be. Large Wolf spiders scurrying across the kitchen floor are relocated outside. Adorable little jumping spiders are admired and cute crab like spiders left alone. Outside the huge barn and garden spiders are named and watched in awe as they consume flies and wasps and other pests. The only exceptions to these rules are scary looking spiders that look like they might be brown recluses and anything shiny and black no matter the size. I am terrified of Black Widows.

I threw away a perfectly good vacuum once after sucking up a Black Widow. I have nearly died of heart attacks after coming into entirely to close of proximity to them. I hate them. Maybe worse than Brow Recluse but only because they are more easily recognizable and I have recognized them way too often.

The other night we were making a final sweep of kids rooms making sure everything was put away and down for the night. The lights were off, with only the faint glow of nightlights to see by. I saw, very clearly against the white of the door, the outline of a large spider. Interesting I thought, the outline had to be of barn spider type, it certainly wasn’t our usual house pet. I walked over, to the other side of the kitchen, and turned on the light. 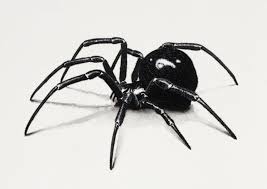 Back across the kitchen again I took a closer look. I didn’t need to get very close to recognize the huge, shiny, bulbous back end of a black widow. Now, I kill spiders. I am perfectly capable. I don’t run in fear or scream like a girl, very often. I took off running through the house screaming, somewhat quietly, even more than I wanted the spider gone I didn’t want to wake children.

My big, strong and, most importantly, male husband, who had just taken out his contacts, popped his head out of the bathroom to see what the commotion was about. Or maybe see is the wrong word here. He wanted to know what he was supposed to do about it, he was dressed for bed and could hardly see. I told him tough, he’s the man he gets to kill spiders. I should get to play the girl card once in awhile.

He, very willingly all things considered, went to rid our house of this scourge. I coward at the edge of the kitchen as he inspected it once more then smashed it to bits. After the joyous slaughter we ventured closer to inspect it. We couldn’t see a red marking but there wasn’t much left of it either.

He spent the rest of the night trying to get me settled. I was in tears, that horrid spider had been close to my babies. Who knew how long it had been in our house, close to us. I was completely freaked out. Have I mentioned I hate Black Widows? This one had been huge, bigger around than a quarter and that was just her body.

Possibly the thing that bothered me the most in the long term, because I have stepped foot back into the kitchen, was hearing my mom’s voice coming out of my mouth as I ran screaming. Not that I don’t like my mom. I’m happy to acknowledge our many similarities. But screaming with her voice as I ran from a spider was a little too glaring a reminder that in the end, no matter what we do, we all turn into our mothers.

The Night Daisy Got Whipped By A Racoon

Probably one night of many, but the one that we know about.

Daisy was barking, loud and frantic. I was trying to put 8 to bed and it was annoying. He kept saying Daisy, Daisy instead of thinking about settling down. She spends lots of time barking, we usually assume Coyotes and wish she would be quiet. Especially when it’s right outside our bedroom window.

My hard working husband was going up the backstairs, I asked if he could yell at Daisy while he was up there. He stepped out the door then rushed back in cussing and grabbing his rifle. He charged down the stairs gathering ammo as he ran. Daisy had been standing outside our back door barking frantically, really very worried and upset, at a racoon standing happily eating her dog food. Right next to the house. She had been helpless to do anything but stand there and yell at it and it didn’t care. The racoon had run off a ways when the door opened but he didn’t doubt it would be back.

Daisy was in the house by then cowering happily away from the big mean racoon. I was called up the stairs to see, outside the window, the racoon, back again, contentedly chowing down on the remaining dog food. He was big. Apparently bigger than Daisy wanted anything to do with. I left my coon hunting husband to work in peace. Unfortunately he missed, vehicles everywhere and a running racoon in the dark but as far as we know the racoon hasn’t been back.

Of course the dog food is gone, that could have something to with it.

The three of us stood at the sink doing dishes. If I kept my elbows tight at my sides I could almost fit. Some dishes were getting cleaned, lots of water wound up on the floor. 8 decided to get down and do other things, I breathed a big sigh of relief. Keeping half an eye on him while we finished dishes I watched him pick up the big purple ball and leave the kitchen. I felt comfortable knowing he had found something harmless to play with.

The Goblin Child and I happily washed dishes, splashing and playing. I glanced up to check on 8 and saw that the ball was flat. I did a double take, we have many flat balls scattered around thanks to Rusty, I was sure the one he was playing with had air in it last time I looked though. On closer inspection his other hand held a kitchen knife. He stood there clutching his knife and murdered ball, looking like a small, deranged, killer from some Halloween horror flick. I dropped whatever I was holding and ran for him before his murderous rampage could continue.

The Coming of Fall

It’s that time of year again. My summer loving, gardener husband is sinking into depression and I am loving fall. The pumpkins came back amazingly well after the hail and we’ll have a few if not the usual boatload. The weather is turning cooler, we haven’t had a frost yet and I think I’m going to die when it hits eighty.

The Goblin Child was adorable making the pumpkin lights talk while she “helped put them up.

We went to the Octoberfest put on as a fundraiser for the Lister Sage community center. We went last year without the children and were sad because everyone else had their kids there and it looked like so much fun. This year they came and were so cute dancing and playing with friends.