I spend my life terrified.

What more can I say. He loves Daisy and her food.

We got you a present unfortunately stupid Amazon’s 2 day delivery does not mean our area apparently. So it should, hopefully, be here Monday. I should have ordered it sooner. We’ve been so busy and I didn’t realize Fathers Day was this weekend. Oops. So here’s a picture and maybe it really will be here tomorrow. 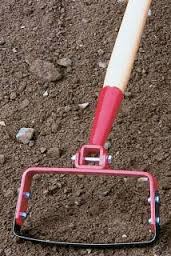 Happy Fathers day anyway! You’re a great dad. The kids are crazy about you, I love the way their eyes light up when you come home.

To my dad too! You’re great! Wish we got to see you more often. The Goblin Child loves her Different Papa. And Justin, such an awesome dad. This family seems to be blessed with an abundance of great fathers, how very lucky we are. 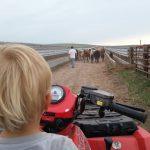 The neighbor and usual good help, Clint decided to AI his cattle and asked if we would be interested. We thought and talked about and decided to go ahead and try it. He has so far handled all the details with us only needing to show up. He arraigned for the needed supplies from a nice looking Short Horn bull for most of our herd and one straw from a black bull for our already very colorful Blue.

Yesterday we brought the cows in and sorted the calves off, then Clint arrived with a couple more head, an expert and supplies. Not to AI yet but to get ready to. I had no idea what was going on sometimes it’s best just to do what you are told. But for the sake of writing this I thought I should find out so I can tell about it without sounding like an idiot.

So, they inserted CIDR inserts. CIDR means controlled internal drug release. They are plastic and T shaped, coated with hormones to bring the cows into heat. They are used along with a shot of GnRH,  to synchronize the cattle so they would all come into heat at the same time. Now in seven days they will pull the CIDR out and give an injection of a prostaglandin F2. After that they will be ready to inseminate in around sixty hours, less for heifers more for cows.

What are all these things? What do all those letters stand for? I don’t know and really can only do so much research, children and all that. Maybe I’ll look into it with the next installment.

A Compelling And Unique Argument For Gods Existance

I read this article on Slashdot and was enthralled.

An anonymous reader writes: At Recode’s annual Code Conference, Elon Musk explained how we are almost certainly living in a more advanced civilization’s video game. He said: “The strongest argument for us being in a simulation probably is the following. Forty years ago we had pong. Like, two rectangles and a dot. That was what games were. Now, 40 years later, we have photorealistic, 3D simulations with millions of people playing simultaneously, and it’s getting better every year. Soon we’ll have virtual reality, augmented reality. If you assume any rate of improvement at all, then the games will become indistinguishable from reality, even if that rate of advancement drops by a thousand from what it is now. Then you just say, okay, let’s imagine it’s 10,000 years in the future, which is nothing on the evolutionary scale. So given that we’re clearly on a trajectory to have games that are indistinguishable from reality, and those games could be played on any set-top box or on a PC or whatever, and there would probably be billions of such computers or set-top boxes, it would seem to follow that the odds that we’re in base reality is one in billions. Tell me what’s wrong with that argument. Is there a flaw in that argument?”

For anyone who doesn’t know who Elon Musk is he is brilliant. Think Tesla, space travel, PayPal. He played himself in Iron Man 2, not that that’s an argument for brilliance but it is cool. He is the real life version of Tony Stark. And he is not religious. Does not believe in God.

So without believing in God he decided that the world probably exists as a game, good verses evil, with spectators watching to see how it is played and what the outcome is. Is that not exactly what Christians believe?

Lucifer challenged God, to a game, to see who was more powerful. God being good and fair didn’t simply destroy him but instead gave him earth as his game board to show the heavenly beings that he was the good and rightful leader and satan was wrong. They are engaged in the most important game ever.

What can I say, Elon Musk has it all figured out.

And Then Spring Came

When that happens all free time disappears.

There are cattle to get sorted, calves worked and everything hauled to pasture. Us girls got together and branded out little bunch of calves. All two of us girls this time. With most of the kids along. The one that wasn’t there was the only one that would have enjoyed it.

The garden is mostly in. We’ve been enjoying lettuce from the green house for a while now. Tomatoes are all in, peppers too. Trying for a sunflower house/corn maze again this year.

With the warm weather there has been lots of time to play outside, with the cousins and with friends. We’ve been climbing trees, playing with Little Tiny Kitty and checking out strange bugs. Life is good. So busy there’s barely time to breath right now but good.