An Afternoon At The Meusum

I was thinking about “Only In A Small Town”. My list of topics to go under that heading keeps getting longer. There were the kids dropped of at the city pool in a windrower, you know the thing you cut hay with. The tree that blew over, nearly missed the nursing home, was the talk around town, caused a traffic jam (Hay Springs style) of cars driving in to see it and made the front page of the paper. Speaking of the paper my tornado picture also made the front page, not credited to me of course 🙂 (on the right) 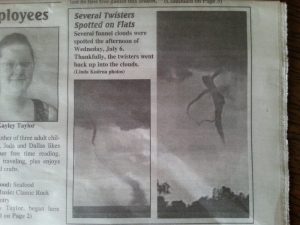 My hardworking husband stopped for gas on his way home from one of his jobs and ran into these three guys. They were flying to Michigan from somewhere and stopped at the city airport to refuel. Of course there are no tanks there so they drove across the street to the gas station. What fun.

We ran to town today for root beer floats, free from the bank every Friday in July! We were out of pink lemonlaid and The Goblin Child has a strong addiction going, so we parked in the middle between the bank and the grocery store, no point in driving one block. I got her out and sent her up to the sidewalk while I got 8 unbuckled. She found a mouse. The poor thing was pressed as hard as it could get against the brick storefronts running back and forth looking for something. Of course she had chosen her bright red cowboy boot to go with her shorts on this hundred degree day.

Now the mouse was running back and forth against the store fronts with her stomping along behind it like a crazed person. Back and forth they went as I stopped to stare half laughing half horrified that she might succeed. The grocer had carried a bag out to someones car and stopped to see what was going on. He cheered her on then ran to open the door of the bank as she herded the mouse into their doorway once again. Luckily for the bank it was locked. The teller had an errand to run, she had left with a back in five sign taped to the door. (I should mention that we have two banks, we’re big time here, this was not the bank with the root beer floats,)

The mouse ducked, cowering into a little hole in the sidewalk. We could see him there just below sidewalk level but I was able to convince her to let it be and we went shopping. She was also persuaded to forgo her usual complimentary sucker in anticipation of a root beer float. It is the best little grocery store, always willing to special order anything and, hey, free suckers! We try to make a point of spending the little extra for food there.

On the way to the bank we noticed an open sign on the city museum and a lady sitting in there to say that it was true. With 8 we try to avoid things like that but decided to try it anyway. Inside we greeted the former kindergarten teacher of forty some years unfortunately our children will miss having her. She was volunteering to spend her afternoon sitting in the hot airless old museum to keep the doors open for the four, counting us, small groups of people that wandered in on this particularly busy afternoon.

The kids enjoyed it way more than I would have guessed. The Goblin Child ran about finding things to look at and yell for me to come see. I spent the time running after 8 who was also fascinated, trying to keep him from breaking things or holding him as he arched and squirmed trying to get down. Apparently they are open afternoons through the summer, we will have to try to get back again.

At the bank we waited in line for our root beer floats. We knew everyone in the line and friends of the kids came running to greet them with arms thrown wide. The Goblin Child cowered against my leg and refused to return the greeting. After retreving 8 from someones office an older cowboy friend tried to get 8 to sit on the couch with him. 8 refused but The Goblin Child climbed up and cuddled against him. I knew him but don’t believe she had met him before. I told her she shouldn’t cuddle up wit strangers. He said he wasn’t strange only strange looking. She agreed wholeheartedly.  The whole bank laughed. I love this little town.

Saturday actually, a couple of days ago. Need to mark it every year so we can remember.

They got enough for a test Saturday and got rained on. Sunday was HOT and they got started again. We, the kids and I, went in to church came home rested then went over for a ride. As we pulled up to the field 8 saw the combine and started saying lala lala, he was unable to contain himself. I was barely able to get the pickup door open before he pushed his way out it and was off running for the combine.

I was able to catch him before he threw himself into the header. After being forced to a stop he stood and stared in awe. Inside he insisted on sitting on lala’s lap where he sat still for once and gazed upon the wonder that is a combine in the field. The Goblin Child got to have her go at helping drive to but the call is not as strong for her. I bring her tablet and she is happy to sit and play.

8 is his fathers boy. He cries when it’s time to go to work in the morning, wants to do everything his father is doing, all the time. It gets a little difficult but it sure is cute.

The Goblin Child has found a new little friend in the neighbors niece. We invited ourselves over for supper the first real day of combining and found her there to play with. We keep inviting ourselves back so they can play more. It’s nice to have a girl to play with so close, as fun as all her little boy friends are a girl is good for some variety.

We may not be doing much riding right now but we go out and visit them. Coyote has been giving lots of pony rides and I’m trying to get out and ride him once in awhile. There is an interesting sounding show coming up and I’m thinking about giving it a try. It’s not strictly practical, any spare time I’m able to squeeze right now has been going to riding! Rusty and I don’t think I can fit anything else in. but it’s fun to think about.

My phone said it thought we would get storms about two o’clock. We scoffed. The sky was blue, the radar showed nothing. We went swimming.

When I drug the kids away from the water, just before two, for completely unrelated reasons we were quite shocked to see a large black cloud that had built suddenly just west of us. We rushed home and I got the kids to bed, then I went out and watched. And took pictures of course.

I can handle this type of tornado. I can see it clearly, it’s far enough away and didn’t look look it was touching the ground. From other peoples pictures apparently it was. One of those was by our neighbor to the south, the one from underneath it.

The weather radio said they were fourteen miles south of town, we are about seven miles south. That’s close enough. More storms are coming, radio is going crazy again. We’ll brace for another round.

This one is hard to see, my phone would not focus and it’s little and sideways in the cloud

It was kind of a spur of the moment thing. Early in the week my husband asked if I wanted to try another family trip to the hills. I did of course. We enjoyed our trip last year and when we find a good thing we like to stick to it. So we did the same things as last year. Mostly.

We went back to Legion Lake again. It was great again. Despite our knowledge of its folly we rented a paddle boat again, as usual it was a bad idea.

Afterward with children, amazingly, still alive we ate lunch then played around the lake. The Goblin Child found a friend from Minnesota and they played happily. 8 ran around, and crashed.

Then we went into Keystone and rode the tram. It rained. But it was still fun. We ate.

After all that we still squeezed in Reptile Gardens. The rain had stopped it was beautiful. They didn’t think the tortoise was alive, scared them half to death when it moved.

We stayed the night at a hotel in Rapid that we had stayed at after The Goblin Child was born. We loved it that time, this time it was still nice, the children were awful. No one slept and everyone was up bright and early the next morning. We had promised The Goblin Child that we would go to Storybook Island and she was really looking forward to it. It was pouring rain. We went to Perkins for breakfast hoping it would stop. It didn’t. So we looked for other things to do. We found a cave. I remember my dad taking me to caves as a little girl and loved watching The Goblin Child go through with her Lala. I carried 8.

It was still raining when we got out we wavered on what to do and wound up at Chapel in the hills. It was beautiful. I explained to The Goblin Child that this was her heritage, it is all very Norwegian.

Then despite the rain, which had let up considerably at least, we went to Storybook Island. She loved it again, especially the merry go round. It was pretty cool, I think I liked it best too.