I have been imagining which one the Goblin Child will want for years, nearly three years now I started before she was born. Lined up on the wall at Bomgaars the halters looked so pretty. They had the plain old styles with stainless steel hardware in all the basic colors. My favorite ones in smoky hews of blue and orange with copper hardware, the fancy ones with leather and matching rivets. I must admit those were the ones I imagined her choosing.

Everything in the store was on sale, we didn’t need anything but it’s always fun to look. Walking through the horse stuff the new selection of halters caught my eye. And how could it not in blazing oranges, hot pinks and neon green all emblazoned with brilliant contrasting design. I was enthralled. So much for my dignified, classic colors.

I must admit I was surprised we when I asked which she liked best and she chose the green one. We oohed and awed over it for a bit then I was as usual unwilling to spend the money and decided to put it back and wait until she was older. My slightly less cheap husband pointed out that it was on sale and ordered me to “Just get it!” So we did. A new halter requires a new lead rope of course, this time she did choose pink.

I think they pull the look off rather nicely. Of course her pretty little mare would make anything look good.

The Goblin Child is not a name that fits a little girl who has decided that her name is princess, besides being so long to write. I am thinking about changing it. That’s a hard thing for me. I stick with the names on horses papers, or some version there of no matter how bad. But after mulling the beautiful simplicity of 8 for her brother, and considering ogre as an option for him to go with goblin, I think I might take the leap. Right now it’s between elf and her own choice of princess.

How did I produce such a girly girl? It’s ok though, I know there’s still a good dose of horse loving tomboy in there. 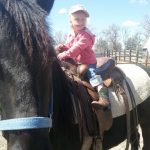 Preparing for life on the stage:

It is spring time after all.

We have seen more of cattle giving birth than most children see in a lifetime.

I told you Poppy was about ready to calve. She had a healthy spry bull calf. Of course I am happy about it but I was pulling for a heifer. 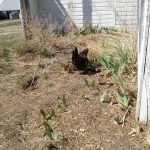 My chicken that was missing showed up today. With, if I count right, eleven darling little baby chicks. With these added to the other four we have exactly way to many chickens. Anybody need some chickens? I suppose we should see if any of these make it before I start to worry about what to do with them.

And last but most importantly I have decided to go with my brilliant husbands suggestion and call the boy 8. I am embarrassed to admit that he had to explain the significance to me. All I could think of was my favorite trainer the great Eitan and I couldn’t figure out why my non horsy husband would want to chose him for a name sake.

So Many Things so Little…. Energy

I can’t say I don’t have the time to write, I spend hours every day sitting here at or at least by the computer. But I lack the energy to put in the effort at two in the morning. So maybe I can tie most things together here in one, kind of short, post.

We watched Moms’ Night Out last night. My sister-in-law recommended it and it was as good as she said. Critics hated it, but they hate anything vaguely religious.

It got me thinking about getting out without the children to blow off a little steam and how lucky I had been to get to do just that last weekend. Not to get dressed up and go to a fancy restaurant, that does not sound fun to me. Especially without my husband, where would the fun in that be? Instead a friend came over and she and I got to go ride. The six weeks was over yesterday so I almost waited the whole time. And if this was maybe not my first ride post baby it was the first real ride, more than five minutes. She rode Jerry and I tried out Princess Onna! OK, not for the first time, I had hoped on and ridden around our driveway for a couple of minutes the day before. This time though we went out around the yard.

Our companions did a perfect job of being calm and leading the way. Onna bounced off Jerrys butt and shied away from all the imagined threats while Jerry plodded along for her young inexperienced but potentially very good rider. It was great. Like Coyote, Onna wanted to act like she was scared of everything but like Coyote she didn’t do anything really bad. I can take a Morgans high headed spooking any day it’s those dang quarter horses and their tendency to drop their heads and buck that I can’t stand. Or stay on. Can’t wait to ride her again.

We hurried back to check on the child who was napping. She was still asleep so I woke her up and switched horses. With her up on Coyote with me, bareback in a halter as usual, we all went out through the cows and found Poppy. She looked about ready to pop, and I had been afraid she hadn’t bred back, so we brought her in. The Goblin Child loves chasing cows and, now her new favorite thing, trotting so she had a blast. Poppy as good and sweet as usual came in nicely and is here by the house in the same pen as my  heifers and the old crippled cows where I can watch her. We watched one of the other cows calve the other day and now know where calves come from. Butts of course, where else?

After getting Poppy in we ran into the father-in-law who was planning on moving the bulls and we got to help with that too. It was the longest ride The Goblin Child has ever been on and she was happy the whole time. If not for a certain small sweet boy child we could get lots of riding in this summer. Jerry decided she had had enough riding by the time we headed in and was quite energetic about it. I had made the girl riding her work on one rein stops on a previous ride and she was able to do a few of them and get Jerry back under control. With practice I think she has definite potential, hope she can come ride more often. And not just so I have someone to ride Onna out with. Really.

The next morning, Easter, the father-in-law decided to move the cows to a different pasture. Sending the children up to the big house to play with her cousins and nap where there was someone to watch him I threw a halter on Coyote and went along for the ride. It was great. It was a little much for my first couple of rides after a few months hiatus. We galloped across the pasture. We chased cows. Coyote loves to chase cows other than eating it is the only thing the grouchy old boy likes. He was hot I needed more than a halter. Most importantly I didn’t fall off that can be difficult to avoid working cattle on Coyote.

I am so sore now I can barely move.

Oh yeah, Easter was good too. Lots of food and eggs to hunt. The kids had a blast.

I know that I barely mention our new addition here and I feel bad about it. Isn’t that how it always goes for the second child? He is so sweet and so little trouble. He will grow up and read this some day and think we don’t love him. It has nothing to do with that of course. He eats sleeps and poops, he very seldom cries and usually only wakes up once or twice a night. Sometimes those times can last two to three hours but fortunately not too often. He doesn’t give us much to write about.

Even when he does I haven’t decided what to call him yet. The Goblin Child just fell into her nickname. I suppose he will earn his own in time until then I have been contemplating Snuffleupagus, I wanted something shorter and easier than The Goblin Child, this doesn’t qualify and I realize now I would never remember how to spell it. The other option at the moment is Goose. It qualifies on all counts. Any other ideas will be considered. 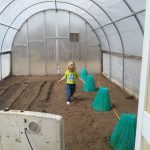 And last but not least, got four tomatoes planted in the greenhouse. One of which was eaten by something and promptly died. No potatoes yet. Hopefully next weekend.

One of the Flock

We are babysitting some baby chicks for a friend. They are here for us to play with until they get old enough to live outside on their own. Until then they are being very well loved. Hopefully not too well loved. That is part of the reason they are here instead of there. It’s hard to explain to a two year old that you can love something too much.

I understand that when my mom and her brothers were little they got to have baby chicks and ducklings for pets. Mom has said they would get them at Easter, brightly dyed in Easter colors. Between the dye and lots of “loving”, my uncles were notoriously hard on animals, they never lived very long. Which was probably not entirely a bad thing, they did live in town. But my grandpa was a farm boy and loved his animals, even if it was a rather rough love. As a boy he had loved to pit the roosters against each other.

It would appear that his love of animals in general and chickens in particular has passed on to his great grand daughter.