My daughter used to be a great and fearless little rider. Between loosing her perfect little mare and a few other things she doesn’t want to ride so much anymore.

I convinced her to go for a ride with me today while her brother was riding in the tractor with his father.

She noticed my new cinch right away! If that’s the first time she’s been around while I had a saddle on with my new cinch it has been awhile since we rode together!

Throughout the ride she kept saying how much she liked the cinch. It is beautiful in my favorite colors, all purple and orange.

By the time we finished the ride it occurred to me that this could be useful.

If you keep riding and start doing this more often, I told her, we can see about getting you a cinch of your own. When we get home we’ll look through her page and you can chose the colors and design that you want.

At home we sat down at the computer and looked at Lexy’s page. As we looked m daughter decided she wanted a unicorn! In purple and pink. Oh dear.

Since I had an on going message with Lexy I told her we could ask and see. It seemed like a bit of a stretch to fit that onto a cinch.
Lexy answered immediately and was very sweet, not only willing to try to get a unicorn on a cinch but encouraging my daughter to keep riding in order to get it.

We’ll see if she keeps up the riding or not. Hopefully this will be the extra push she needs to get back to it. She did a great job riding today!
Lexy’s fb page is here if anyone else is craving a purple and pink unicorn cinch, or even something a little less extra

My sister in law has decided to clean out the shop. It’s a pretty impressive undertaking. Stuff has been accumulating in there for decades.

In the cleaning I have found quite a few items that will work as horse toys.

Out of the large collection of tires carefully stored away there were some smaller ones that I thought I might try for small pedestals. The first one I tried was for a three wheeler. It was too thick. I wanted wobbly but it was too wobbly.

The next one was an old fourwheeler tire.

I drug it out and screwed a small piece of plywood also scavenged from the shop to the top and tried it out. It was smushy but not too wobbly like the thicker one. When Rusty got both feet on it smashed almost flat. It would work.

I needed to take it back apart, trim the plywood to fit and add some of the rubber, also found in the shop, to the top so it wouldn’t be slippery. I asked where to find a saw. Starting to do things myself usually ends up with my husband deciding he needs to do them for me. Not entirely a bad thing 😉

A saber saw made quick work of the plywood. A carpet knife cut the scrap of bed liner surprisingly easy. Screwing it all back together was a little harder. The screws didn’t want to go through the tires, there was no getting them back  in the old holes. When  I pushed hard enough to go into the  tire it pulled right through the rubber on top. My husband found a scrap piece of metal tubing just the right length to hold the tire up and the screws went right in. Washers would also have solved the problem.

I may fill it with expanding foam at some  point or leave it as is. Part of the purpose of pedestals is to teach a horse to trust and step onto things that aren’t perfectly steady when we ask.

Once that was completed I started off to add some scrap pieces of old baler belt to my bridge! In horror my husband came to do that for me too. Between baler belts and the rest of the bed liner the bridge is now slip proof.

Now I just need to get out there and try it out. I wonder if the horses will be bothered by the new look of their old toys?

Oops, just realized after writing all of this out that it was on the wrong blog! I meant to put it on Rusty’s blog, it’s a piece for the Academy. Sometimes it’s easier to get longer ones written out here, or there 😉 then copy and paste after some proof reading. I guess I’ll leave it here because it doesn’t really matter where I put it.

Positive Punishment? Negative Reinforcement? A Little Of Everything?

Sometimes the lines between the quadrants aren’t as clear as we would like.

My daughter hadn’t been sleeping. I need sleep, I found this to be very strong Positive Punishment. Walking through the days in a tired foggy haze made me grouchy and miserable to live with. That was not strong enough positive punishment to keep her from coming into our room every night just wanting someone to come back  to her room with her to stand there until she fell asleep, over and over again.

We tried all sorts of different techniques to get her to stop. After the first few times which were nightmare induced, it wasn’t because of fear so much as habit. She would be up and headed to our room before she was even fully awake. We tried patience, I admit I yelled a few times, my husband made her a noise machine that played audio books for her all night long. Please just lay there and listen to your book instead of coming to get us every time you wake up, we begged her.

None of it worked.

We were exhausted and our tempers were getting short.

This is where the lines start to blur.

I have been making the children come with me to feed in the mornings since they have been out of school. It’s good for them and they enjoy it once they get out there, even if they beg not to have to go every single day. It’s a fight to get them out the door.

It’s good for them, everyone needs to learn about work and responsibility. To them it is positive punishment though.

I told her that if she could make it through the night without waking us up she wouldn’t have to come with to feed.

It worked. She said the next day that she had been out of bed and almost to our door before she remembered feeding.

So she went back to bed.

What  category does this fall under?

Had she not slept I would have been applying positive punishment by making her continue to go feed with me.

Positive punishment isn’t always a bad thing. We think of it as punishing, cruel and hurtful. By the scientific definition it is anything that stops a behavior. In real life the punishment I offered is something that is far better for her than not to be punished. So often we, our horses, everything, look at things that are good for them as a bad  thing. Sometimes it’s uncomfortable, sometimes it’s hard to do. That doesn’t mean it’s not the best thing to do.

We would  like the lines between the quadrants to be well defined and clear. Punishment bad. Reward good.  Really though life is a constant weighing and re-balancing of the scales. 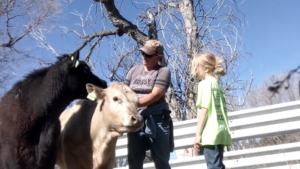