It seems like it would be an easy thing. Sit at the computer for an hour and talk about horses, training, and books. By the time we finished I was beat. It was worth it though.

Getting to interview for the Equestrian Author Podcast was a lot of fun and hopefully good for both the book and the Academy.

I wanted to get it down here so it could be found again in the  future without having to search too hard. 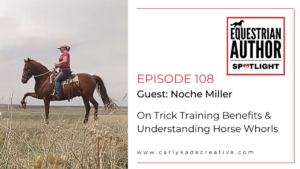 A local lady has been holding weekly riding lessons for the 4H kids. It’s a group lesson to help with basic horsemanship. The kids enjoyed the one we’ve made it to immensely. They do much better listening to someone else than they do for me. I also don’t think of the great fun games to play! We are so lucky that she is willing to give her time to help the children.

The best part of it came later, well after the lesson.
I got the horses out and both children happily climbed on. We were going to go out for a ride, but the kids wanted to play games, like they did at the lesson, first! Alright. We could sure do that. I got out a barrel, a cone, and some rings. They proceeded to play.
Riding his little mare up to the barrel my son narrated what he was doing. “Stop by the barrel, pet my horse so she knows that she did a good job, put the ring on the cone”.
How wonderful is that? Not only do the kids get help learning to ride but they are all getting a small dose of reward based training mixed in there. Not a big hard to swallow one but a perfect little serving, mixed in so smoothly that it doesn’t come across as anything but a matter of course.
That is how the world is changed. 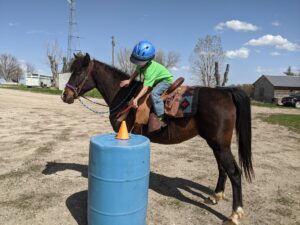 Yesterday morning started out nice. We rushed to get outside before the predicted snow. Loosely bundled we let the horses out. Rusty stood patiently, halter already on, and waited. Giving The Goblin Child her halter I sent her to put it on their horse.
She doesn’t do this regularly. Something we need to work on.
It was so fun to watch her struggle to get the pieces figured out and in the right places. At first she firmly ordered 8 to get away. She was doing it and didn’t need help.
As she fought her battle Rusty smiled frantically at the camera, wind blew, Harvey, left behind, screamed. The chaos was real.
After struggling a bit her tune changed and she was asking for help. Together they were able to get the halter on their very patient little mare.
Proud of themselves and a job very well done we headed off for a brief chilly ride as dark clouds blew in and the snow came much earlier than expected.
Category: 8, Goblin Child, Horses | LEAVE A COMMENT
This kid.
This mare.
I had thought she was going to be my daughters horse. They’ve all proved me wrong. My son enjoys her zippy quick moving ways. We all enjoy her quiet, dependable, completely trustworthy ways. She’s a saint.
Not vaulting but still gymnastics on horse back.
Category: 8, Horses | LEAVE A COMMENT

I love to get dressed up for Halloween and play a little. Getting the kids to play with me can be difficult. We still haven’t managed to try the headless horseman. The animals can always be counted on to play though!

This is so exciting to me.
Being in the top 100 horse care books on Amazon since Understanding Horse Whorls was released is pretty great. I looked to see my book there, because how cool is that? I know it’s not number one or anything, I would never dream of reaching that status. Top one hundred is awesome enough for me.
The thing that made this even more exciting is seeing Nashon Cook’s book Being With Horses just ahead of me! He is an amazing trainer. I’ve been watching the release of his book thinking how great it was. How he was going to sell so many copies and I wished I could be like him.
Now here we are. Right next to each other. How cool is that. I feel almost famous.
Of course there’s a unicorn coloring book way ahead of us both but hey, who wouldn’t want to color unicorns. I’m not threatened 😉 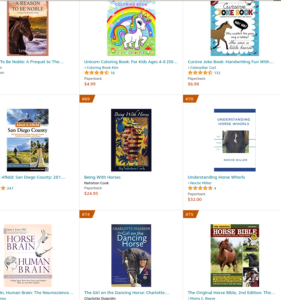 The book, my book, Understanding Horse Whorls is available. Again.

It was released some time ago. In the spring maybe? As an ebook. That went very well. Sold copies all over the world. Lots of people asked for a print version though. And there were lots more things I was still learning that I wanted to add. So, I started adding, and I started reformatting, all the things it took to get it to print form. Then there was more editing, fiddling with the cover, all the stuff. It took a long time. We were also busy with the other summer stuff and my normal work I needed to do so there wasn’t a lot of time to work on it. Thankfully the kids went back to school 😉

After a going through a few proof copies with all the waiting to be delivered that that calls for I think I’ve fiddled with it enough. All that I’m going to at lest. Until people start pointing out the errors that we all have missed. Then there will be some more fiddling.

We were rushing, as always, to get done with one thing and get on to the next. I had been telling the kids repeatedly that we had to hurry!

Then we pulled into town and there on main street were three horse butts sticking out from between the parked cars. I slowed down to stare. Then pulled into the next empty spot. The Goblin Child started going on about how of course there was time to stop for horses. There was always time for HORSES. In fact she went on quite obnoxiously along that vein the whole time we visited with the people.

The horses turned out to belong to two guys who were riding from Nevada MO up to Mount Rushmore!

The horses were hard worn and obviously had seen work. One wore a pack saddle fully loaded with gear. The other two were fitted with saddles, ropes hung from the pommels, saddle bags and water bottles on behind. The horses, in bosals, stood heads down, leg cocked, enjoying a moment of rest.
The men sat in the shade awaiting one of the wonderful sandwiches available at the newly reopened grocery store.
On the road for forty some days now, they started out across Kansas before turning north into Nebraska until they reached the cowboy trail. They been following that handy path for the last few days. They can cover about twenty miles a day. They have no support crew and are out here on their own.
If you would like to follow their journey, see what they’ve been up to until now and hear how the rest of the ride goes you can find them on their Facebook page Ride To Mt. Rushmore, here: https://www.facebook.com/groups/152851483490111
Category: Horses | LEAVE A COMMENT

Places The Book Has Sold Around The World, for whorl page

As new book purchases come in I get to see just a little bit of information, a name and where the purchase was from.

Most of the people who buy Understanding Horse Whorls are from the United States, followed by Canada, Australia, and The United Kingdom. I love you guys, don’t get me wrong. It’s just not quite as exciting to see those as it is when the purchases are from places like Costa Rica, Germany, France, Netherlands, Paraguay, or Bulgaria.

My daughter sat down with me and asked where the first person who bought the book had been from (it was the US). That lead us to a search back through my email history and a lesson in geography. We sat down with google maps and searched the world to see where these places were. In Bulgaria we zoomed in and got a street view of a random small town. I would have stayed at that for hours. It was beautiful and so different from here. I would do it the whole world over if there was enough time in a day.

For the fun of it we started a map keeping track of the different countries. All countries the book has sold in are marked. The numbers are not even close to exact. Neither are the places. I let google chose random locations since I have no idea where anyone was from.

One of the things I love about this page is learning about people and their horses from around the world. I now know about the Carthusian strain of Andalusians and the Kaimanawa of New Zealand. There’s always so much more to know though. In the comments tell us where you are from and something about the horse culture in your area. It doesn’t matter where you are from, the US is foreign to many members. 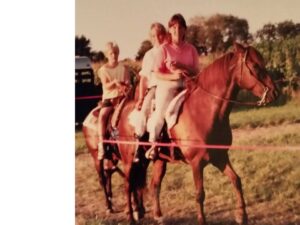