I feel girls should be able to do (almost) anything boys can do. Whether they choose to or not. Just as Boys should be able to do, supposedly, girly things. We try to do as we preach so we are starting The Goblin Child out early. Not only should everyone know how to drive a stick shift, she will have to work more on this lesson when her legs get longer, being able to drive a semi never hurts.

She enjoys practicing. I think. It could just be the horn she likes.

Hauling hay is a family affair. The cousins come along and play in the sleeper and take rides in the payloader. Bouncing across the hay field makes for some surprisingly good naps too.

I see that my last post was about how hot it was. All we hear, on what little news we hear, is how hot and dry this summer is and the fires. So I guess/realize how lucky we are but still a genuine freeze in August?

We haven’t talked to anyone whose thermometer read below thirty five. And these are farmers, they take their weather watching seriously. That seems a little warm for frost. Between that and the short duration of the freeze hopefully that kept it from being a killing frost and the crops in the field fared as well as the garden. It was already a bad year this doesn’t help.

There are so many things I mean to write about and never get around to.

Like the fire in a wheat field a couple of miles from us. We saw the black smoke billowing up and, since no one would be purposely burning on such a hot windy day, had to go check it out. They have some cattle on pasture over that general direction and as we explained to The Goblin Child we had to make sure it wasn’t burning their feet. It wasn’t.

A neighbor had caught their wheat on fire while combining. The fire department was already there and had it out. Much of their wheat was burnt but the green fields and bare dirt, I know better than to call them plowed fields but what is the proper terminology here? farming is beyond me, along the sides had allowed it to be contained before anymore damage was done.

Very astute readers may recognize the trees on the hill in the back ground and the section line along side from this post, years ago.

But what I meant say before I got distracted was…

It was hot today. Far hotter than what I thought had been predicted. The children, one in particular needed exercised though so we went out anyway. I turned the sprinkler on so it was just hitting the swing set and we swang. Then noticing that the pivot was close we walked out and played in it. It was heavenly. And cooled us off enough for the long walk back home.

Now that it’s turned hot and dry it has done so with a vengeance. All the moisture earlier in the year created lots of fuel and the air tonight was heavy with the scent of smoke.

I knew they’d been eating the chickens corn. The signs were obvious. As the corn got lower in the bucket I waited for the day it was too far down for our mouse to climb back out. I was a bit surprising to find five mice inside.

I wasn’t sure what to do with them. The Goblin Child was staring at them fascinated. I could not set them free, we are over run with the little pests. Usually I would call Daisy to take care of the problem for me but how could I with a small child cooing over them?

As usual my small Goblin Child surprised me. She watched them for awhile then declared that we needed to call Daisy. She will grow up knowing the facts of life. We have watched calves born and suckled and died, gardens grown and eaten and she knows how to take care of a mouse problem. 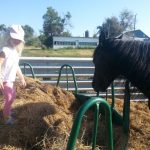 It had been awhile. Like months. Since spring, 8 makes it a bit difficult. The ride was short, around the quanset and back, but it felt good.

My darling Coyote isn’t getting any younger and although in theory I believe horses can live healthy useful lives into their thirties I’ve never had one make it past twenty. He has been lame on his left front twice this year, he’s never lame it worries me. But it also is interesting to me that it’s the same leg that he severed an artery in years ago. If we hadn’t been watching when he did it he would have bleed to death in minutes. The vet drove over an hour in the snow on a Sunday morning to come patch him up. To my shock and horror at the time the vet simply sewed the artery shut and patched the hole.

I wanted to know how blood was going to get down the leg and was assured that the surrounding veins would take up the slack and carry a little more. And they did. He has worked hard most of his life since then and never been unsound. Until now when he is suddenly and mysteriously off in that leg. Who knows maybe it’s unrelated.

I was greatly bothered to hear of the death of one of my favorite studs this summer. Old ways bimbo was high up in the running when I was looking for a stud to breed Princess Onna to. And now he’s gone at only seventeen, if my math is right. The exact same age as Coyote.