Do you really need to ask what they are being tested for? Things need to work. If they don’t work the bulls can’t work. Getting things tested every spring is the best way to be sure you end up with bred cows.
The bulls were in already when I got out there. I had kids to get up and going, breakfast to eat, a husband to see out the door. Things to do first. So they were already up here and causing trouble when I got out.
A bull is usually a basically nice creature. Big, calm, and slow moving. Usually.
A bunch of bulls are dangerous creatures who move too fast to get away from easily and happily destroy whole fence lines without even noticing they were in the way.
Now this bunch of bulls was in the corrals behind the house, waiting to be loaded, together, onto the trailer, happily fighting and trying to destroy anything they got near. Having run together all winter in no way meant they had any pecking orders settled and were ready to get along.
They were not all going into any trailers together.
With care and caution the two yearling bulls and one big quiet bull were separated and put into the bottom of the semi trailer. One big aggressive bull, we called him cauliflower ears for ease of recognition, was sorted out and put by himself to load on the horse trailer next. Space between these guys might save the trailers from being destroyed.
I went to bring the trailer down. As I backed to the chute I saw a bull behind me. One of those things your eyes see but your brain can’t quite process. The screaming and arm waving, at the bull, not me, done by my father in law finally got through and I jumped out to help get him back in a corral.
I still couldn’t process how he had gotten out. Until the father in law grumbled something about being followed out a gate he left open behind him when he went through.
Back to sorting.
Staying out of the way as two bulls crash into each other and plow about in the tight confines of the corrals is always fun. We got a couple more out. One for each compartment on the top of the semi trailer, one for the back, and two on the horse trailer. One compartment each.
Unloading at the vet clinic they asked, with some slight mockery, did we haul each bull separately?!?! Yes, yes we did. We like our trailers thank you very much.
I ended up crawling inside the bottom of the semi, trying to convince the bulls they needed to come out. It’s a bit short and they rub their backs getting in and out. They did not want out. Those three bulls were so nice and quiet. It was good to have some that way.
After finally getting everything off the trailer. I was struggling with a gate latch. Hearing a commotion I looked up. The vet tech was running past me, as fast and hard as she could. Right in front of my nose, on the other side of a panel. A foot behind her, no exaggeration, was one of the bulls running as hard as he could. Directly behind him was a second bull. Apparently the tougher of the two. He was going to get that first bull. The first bull was going to smash the vet tech simple because she was in front of him as he escaped.
Luckily she escaped. Jumped over the panel at the end of the lane. nearly cleared it flat footed. The bulls apparently stopped then. The fence didn’t come down because they didn’t crash into it. I was too busy trying to breath again to remember what happened except that no one died.
No one made fun of us for hauling all the bulls separately again either. A separate pen was found for each individual bull. Apparently the vet was as fond of her facilities as we are of the trailers. 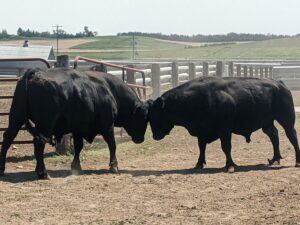 Category: Cows | LEAVE A COMMENT
This picture is NOT our tractor.
I want to get that stated clearly first thing. It does belong to a neighbor of ours and the kids and I stopped and stared when we drove by it the other day.
But, ours came so close to this yesterday. That the tractor and baler didn’t go up in flames yesterday is totally and completely due to God’s hand in our lives.
I was driving home from dropping the kids off to spend some time with their grandparents. A long drive across a long and delightfully empty state. The phone rang. I answered happy to hear from my husband. Instead of the usual greeting he immediately wanted to know where I was and ordered me to stop where I was and wait.
A part had broken on the baler and the only one within a days drive was at a tractor dealer in a town just behind me. I was told to stay where I was and let them finish checking to make sure it was really there.
I waited while calls were made. The part was there. In the small town that I just happened to be next to. That was impressive enough alone. Instead of huge shipping bills and not getting the part for a couple of days, we squeezed in into the trunk and it was home that afternoon.
Once I got home and heard the whole story. It got even more amazing.
A belt had broke in the baler.
When they pulled into the yard to fix it, a roller was broken. The ends mushroomed, the roller itself was not quite red hot, but blue shiny and too hot to touch. They cleared everything way from it to allow it to cool without starting any fires and went to see if they could find missing parts in the last bale, to get them out and keep a bale from catching fire.
All hot metal parts were found. In the end nothing caught fire and the tractor and baler didn’t end up like this on of a neighbors of ours did last week.
Balers burn so easily. That ours not only didn’t, but that I just happened to be on the only town in the state with the needed part is purely and act of God.
God is good!
Category: Farming | LEAVE A COMMENT

We, the children and I, were headed to the pasture. Going to check cows, maybe play in the creek.
As we came over the hill, on the empty county road, we saw a tractor parked at the edge of a field. The driver, standing next to it, turned and walked to the road as we approached.
He held his hand up and waved us down as we got to him. We stopped and he opened the passenger side door.
Could we give him a ride to his pickup? He asked.
Don’t get me wrong, I knew who he was, I knew before we ever stopped. I wouldn’t pick up a random stranger. But helping a neighbor, even one I don’t personally know, is different. I cleared off the passenger seat and he hopped in.
On the way to his pickup we visited. Had his tractor broke down? I asked.
No, he just needed to get back to his pickup to run some parts over to a different tractor working in a different field. He saw us coming and thought a ride would be faster than walking.
Who was I by the way?
Apparently he hadn’t waved us down because we were a somewhat distant neighbor he recognized and asked for a ride. He just saw a random car coming down the road and asked for a ride. The audacity!
I was amazed and rather impressed. 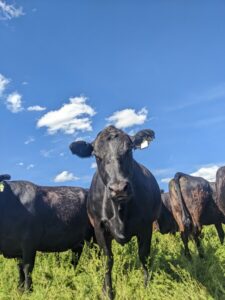 The kids have some dairy goats for 4h.
Those things are so rotten and can get out of any fencing I’ve tried to make so far. For some reason the guys don’t appreciate their help, or their poop, while they’re trying to work. None of us want them in the yard or the garden..
Those things are so cute. Watching all the ‘kids’ playing together is so much fun. I didn’t get pictures of them all going down the slide together. It was too much fun watching. Makes me forget all the trouble and think that maybe we need more goats!
Category: 8, Goblin Child | LEAVE A COMMENT

We had a very busy weekend. As all of them seem to be lately. Life has got to slow down a little bit eventually. Right? I hope?
We got the rest of the tomatoes and peppers out in the garden. It was hot in the bright sunshine. To the north we could see a small storm cloud coming across. They look so pretty, dark grey and white against the deep blue. Soon we could hear thunder in the distance. The noisy clouds often have hail so I was glad it was going to miss us.
Looking up from planting I glanced at the storm again.
Against the blue grey of the cloud a long white rope hung down. I stared a moment then called my son and husband to hurry! Come see this!
We watched a bit, but I wanted a better view. Hopping on the 4wheeler we went by the house and grabbed out daughter too, before driving to the top of the hill in our driveway.
From there we all watched the tornado in wonder as it hung unmoving. If only we could get closer for a better view. There was still a big hill blocking the bottom of it.
It looked like it was in the general area of town, about ten miles away. They can be deceptive though. We couldn’t see it clearly but off to the west we could clearly see a wall of dust coming at us with the cold front that was bringing the storm.
My husband thinking of the delicate tiny plants he had been busy setting out insisted that we hurry back to finish getting protection up around them and close the windows in the house before it filled with dust.
Reluctantly I turned the 4wheeler around and we rushed home.
The kids and I thought maybe we should go for a drive, see if we could get a better view. But when we got back outside the tornado was gone. Back up into the cloud it had come from. The dark storm clouds were already starting to lighten.
The excitement was over.
Category: Family | LEAVE A COMMENT