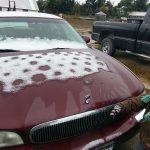 This post is simply to commemorate the first snow of the year, the lighting of the pilot light and starting of the stove for winter, and to get me back to writing here more often.

It’s clear up to 40 degrees now. Last night it rained and them snowed most of the night. No accumulation, just cold. Nothing seems to have froze though. Today is the homecoming football game at school, in the wet and cold. Last night was the dance. It was boring and short, not entirely a bad thing. When I was a youngin, way back when, the homecoming dance was held the night of the game. I think. It’s hard to remember that long ago.

I had fun dressing the kids all week. Or trying to. It’s not easy to do. They fight every step of the way. Or I don’t tell them and then they are so lost.

It’s homecoming week. All week the children will dress up to fit various themes. The first was Athletes or nerds. I wanted them both to go with the nerd theme. The Goblin Child was not interested. We did our best to find an athlete costume. I couldn’t find my high school jersey and decided that horse riding counts as a sport thus horse people count as athletes. I pulled out cowgirl clothes.

Still clinging to my desire to send her as a nerd I thought of my clicker tucked away with the rest of my tack. If I sent that with her she could be the nerdiest of all horse people, a clicker trainer!

8 had no opinions. He happily let me dress him as a nerd. A darling one at that! I only have pictures of him, and him with his class. The Goblin Child just looked like she normally does.

It all started with the fighting. Constant bickering. I ordered them both outside. The Goblin Child complied. Mad. Slamming her way out the door. With both hands she emphatically shoved the door open. Hard.

Glass tinkled to the ground she stepped back staring at her hands in horror. I started to scream. She started to scream. I stopped and checked for blood. There was some. Nothing gushing though. 8 was quite upset by the whole thing. He was worried about her and near tears. He repeated over and over “I don’t know about this. This is bad, I don’t know about this. Lala’s going to be mad. I don’t know about this” He was cute but I was trying to deal with a screaming T.G.C. who was screaming that Lala was going to kill her. I considered the possibility that she might be right as I assured her that he wouldn’t. I thought back to putting my hand through the window in the back porch door and that my loving father had yelled at me. Now I understood why.

Taking her into the bathroom we washed up the blood. What little there was. And got her covered in band aids. I had to get a picture. The scrapes were little. She wasn’t really hurt.  I worried the small injuries would put a stop to our plans to go to the lake after lunch. She sat around and moaned about how bad they hurt. She whined that it stung and look how much skin this one had taken off! By lunch she had quieted and we made it to the lake afterwards.

There they played and swam and mostly forgot about the injury. Until they were home and in the tub. Apparently there are salts in a bath bomb. It hurt again. Out of the tub they forgot about how much fun they had had and that they briefly liked each other at the lake and bickered all afternoon. Finally unable to take the fighting any longer I ordered them both outside. Starting to sound familiar?

No doors were broken on the way out. They played happily for awhile. Then I heard Gus screaming. I met him at the door. There didn’t appear to be anything wrong with him. I asked where he got hurt. I meant on him. He wanted to show me where exactly. By the time he pulled me far enough to understand that it had been the tree I insisted on seeing where on his body he had been hurt. I pulled his shirt up to see his torso covered in scrapes. He couldn’t hold still long enough for me to check him all over but I had the idea. Attempting to carry him in the house without hurting any of his injuries we went in to tend to him. A few band aids weren’t going to take care of this.

I didn’t get any pictures of him. He was actually hurt. He sobbed on my lap for awhile telling me that he didn’t like it. He didn’t like it at all. settling down for awhile he was ok until I pulled up his shirt for another look and he saw one of the scratches. He cried again until he cried himself to sleep on my lap. The hearty dose of Ibuprofen could have helped that along a little.

Thankfully neither of them were seriously injured. Both wrecks could have been bad. 8 will be sore tomorrow but is otherwise relatively free from harm. The door window will be dropped off at the hard wear store to have the window replaced by a piece of plexi glass. I may have suffered the worst of the day. Having both children try to kill themselves in one day is more than I can handle.