I got hurt sorting bulls.

It sounds so cool and leaves so many opportunities for the imagination to form terrible and fascinating pictures of what could have happened. Ferocious fighting bulls, horses tripping, danger, excitement, the romance of the west. That make me look like a cool cowgirl, out there doing tough cowgirl things.

I fell off my 4wheeler.

That one doesn’t have quite the same ring to it. It brings to mind working cattle ‘farmer style’ in the mud and muck. The pretty clothes out of the picture with muck boots, probably overalls, replacing silk scarves and big hats.

As usual with life, the truth is somewhere in the middle.

The kids and I did great. The bulls needed sorted out of the cows. Why? Because it had been decreed that it was time I guess, after they had been running with the cows most of the year, it was suddenly time to pull them. My husband had left the house well before we left to go to church. He was off to go feed and fix a waterer that had been blowing fusses and freezing solid. When we got home he was still working on the waterer. That was when I learned that the bulls needed sorted. After a quick lunch he went back to fighting damage from mice in an antique.

I decided that we could help him out a little. The kids could manage a gate. I could probably get the bulls out by myself with my trusty green mount.

The kids did great. Bulls can be dangerous. Not because they mean to be. Usually they’re just so big they run things over by accident. We are no more to them than a fly we swat halfheartedly. I told them what to do, to get well away from the gate if a bull was coming. That playing around it would probably be enough to keep anything else from getting near. It worked wonderfully. Four bulls quietly and easily brought from the herd and out the gate. I was starting to worry about one of them deciding to come back in and the kids not noticing it coming from behind. They were in the long lane that runs between the feed bunks. The bulls were mostly standing happily eating the calves ration. But no, I couldn’t just leave them be.

I called the kids to come with me. We shut the gate on the main bunch so nothing else could join us. Then started the simple task of pushing them up the lane. Of course the boss bull was in front. He was eating happily and didn’t want to move. The other bulls coward and shied, then the fighting started. In the tight confines of the alley. Realizing the hopeless idiocy of y plan I ordered the kids off the 4wheeler. Get on the bunks, or into the empty pen next to us for that matter. They wouldn’t know trouble was coming or move fast enough to get out of the way if the bulls ran over the 4wheeler in their fighting. The bulls wouldn’t notice at all.

With them out of harms way I tried a bit longer to move the bulls. Daisy quit the chase early, looking reproachfully at me for my silly ideas. My throat got sore from yelling. Two of the bulls went by and off the other direction. Guess that wasn’t going to work. The kids were playing in the snow of their newfound playground. Daisy had gone to the house. It was me and my trusty green mount.

We went back to look through the herd again, not having any idea how many bulls we were supposed to be getting. One more was standing out in the open looking at us. Pushing him towards the gate I was able to yell for a child to leave their play and go get the gate for me. Five bulls sorted out of the cows. Five my tired, cow hating husband wouldn’t have to mess with.

Going back into the herd to check for more bulls I saw an old cow. Lame and bony, she would do better out of the main herd and in a pen being fed with the couple of other special needs cows. I sorted her out and started easing her towards the gate. There was a bull standing in the way. I yelled for a child. My son came but stopped at the fence across from the bull. We had no way to go.

Then, next to me my husband appeared! Finished with the tank he was coming to finish the sorting. I yelled to him to go get the gate. He went without enthusiasm. The cow and I waited. In the waiting she decided she would really rather go back to the bunch. 4wheelers don’t maneuver as well as a horse. Instead of pivoting and easily stepping over to block her I would have to make big circles, back up, and generally be unhandy. So much easier to just hop off my mount and stop her on foot. I jumped off and leaped forward to hold her. My feet went right out from underneath me in the slick wet snow.

My brain took a snap shot of the moment we crashed, my brain and I that is. It happened in slow motion that moment, hanging there part way down forever as my mind recorded the wreck and the impossibility of changing anything. My foot went out to the side, I couldn’t bring it back into line where it should be, something in the back of my calf snapped. Then my butt landed solidly in the snow and there I lay. The cow stood over me looking confused and somewhat horrified. Maybe embarrassed for me. Silly human. Gasping for breath I tried to decide how badly my leg was hurt.

Then in the distance I heard something. The sweet dulcet tones of my husband yelling for me to bring the cow up, the gates were ready. Cussing on the inside I pondered the plausibility of that occurring, then pushed to my foot.  Only one. Although the other did still seem to be attached I felt no desire to stand on it. Luckily my green mount is easier to get on and stay on than my preferred four legged variety. We did bring the cow up and through the gate. Then we did manage to get the two young bulls sorted out of the calves. Luckily there were only five bulls. We had managed to finish that job, just the kids and I, without needing any help from the men. All cool and cowboy like. Only to be brought down by an old lame cow in the end.

By the time the job was completely finished, all the bulls big and small out and run up the lane to there new home by someone more capable than me, capabull? 🤣 I was done. Children called out of the snow where they had spent the remainder of the time playing happily were put to use opening and closing gates to get us home. Then to the couch and some ice. Today I am able to discern that I’m not badly hurt, just wimpy and apparently getting old. At this advanced age I really should be careful about ice and falls. 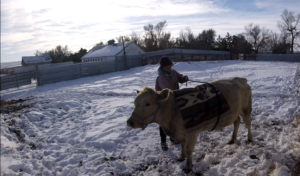 Yesterday morning started out nice. We rushed to get outside before the predicted snow. Loosely bundled we let the horses out. Rusty stood patiently, halter already on, and waited. Giving The Goblin Child her halter I sent her to put it on their horse.
She doesn’t do this regularly. Something we need to work on.
It was so fun to watch her struggle to get the pieces figured out and in the right places. At first she firmly ordered 8 to get away. She was doing it and didn’t need help.
As she fought her battle Rusty smiled frantically at the camera, wind blew, Harvey, left behind, screamed. The chaos was real.
After struggling a bit her tune changed and she was asking for help. Together they were able to get the halter on their very patient little mare.
Proud of themselves and a job very well done we headed off for a brief chilly ride as dark clouds blew in and the snow came much earlier than expected.
Category: 8, Goblin Child, Horses | LEAVE A COMMENT

We had so much fun at a local Christmas lights parade last night. It was even more exciting to see a handful of horses in the parade. And one dog the size of a horse.
It’s always impressive to see horses taking this sort of thing well. The big draft horses walked along as quiet and well behaved as could be. Not at all worried by the lights and noise. We talked to the person with the mini after the parade she said the very well behaved little horse was about worn out by the time they walked all five blocks. That’s one way to get them to behave
The dog on the other hand we saw walking home afterwards quite a ways away. He must not have been as worn out by his load.
Maybe next year we’ll haul horses in to our local parade. Not this one. Too far to go at night down a road constantly crossed by deer and elk. We made it home without hitting any but passed one crumpled car who hadn’t been so lucky and deer grazing happily along the road who were kind enough to stay where they were instead of jumping out in front of us.
Would ours do as well as these did? It seems unlikely but it would be fun to try!
The weather for this one was much warmer than usual. We all wore coats but were perfectly comfortable with them unbuttoned. Lots of people gave out hot chocolate. It was good even in the warm weather. On the way home we drove around looking at Christmas lights while we waited to pick up pizza for the kids book-it tickets.
Category: 8, Family, Goblin Child | LEAVE A COMMENT

At first I thought we’d do a manger scene for Christmas pictures. A somewhat horsey one. Rusty would make a wonderful angle in his wings. I could make the children play with me for Mary and Joseph.
Then things went a bit awry and we headed off the opposite direction and ended up with a Christmas snow fairy instead

And Santa on his tractor of course.
Now all we need is some snow. Why is it so hard to get a girl to put on a dress and take pictures with a horse? It seems like it would be a fun thing. At least Santa was enthusiastic. Oh well. We tried.
Category: 8, Goblin Child | LEAVE A COMMENT