Our Life, In Pictures

Because it has become apparent that I am never going to write anything.

This is how I see myself when riding Nevel:

Or at the very least: 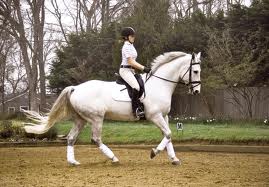 It is interesting that I seem to want to be doing dressage when I ride western, I guess I need to be doing western dressage. So maybe I can picture us like this:

And very soon we will be doing this: 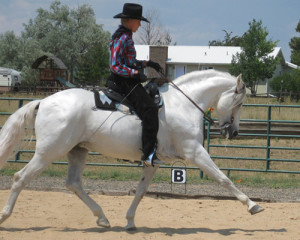 I was so excited when my husband showed up the other day and obliged me with some pictures so I could see just how graceful Nev and I looked together. Imagine my distress and dismay when I discovered I looked like this:

In my defense I was trying to lower my center of gravity in hopes of being less likely to fall off with the green horse, open space, semi and pay-loader stuff going on. It is a little sad to discover it working so very well. Apparently the helmet doesn’t automatically make me elegant and graceful like all the enlish riding people always look. Maybe I should get a pair or breeches? No,bad idea. Diet time.

Nev is still pretty at least.

We very seldom go out, just the two of us. Finding a sitter is such a hassle. But this was a big deal, a rare chance not to be missed. Marty Stuart was coming, if not to town, close enough to count.

Fortunately my equally Marty Stuart loving husbands very young sister isn’t old enough to share our love and agreed to babysit, on a weeknight even. We promised her we should be back by ten, easy. We weren’t. Then we kept her up even later telling her what a great concert she had missed. I think she thinks us old folks are crazy.

We got there before the seats filled up too bad and sat five rows back in the center. Perfect seats. They opened with some of his hits. The whole band took a turn singing. They were all great. Watching a concert with my brilliant husband is more than listening to music, I get to learn the history behind it. My favorite piece of trivia this time was that the base player, who also played an upright base, so awesome, was the lead singer of Exile when they recorded my favorite song of theirs, Keep it in the Middle of the Road.

They played the upright base, the mandolin and of course  guitars. The instrumentals were spectacular. Then they slowed it down and closed with some good old Gospels. They came down for a meet and greet after the show and we wanted to stay so bad but it was already after nine and we had a good hours drive back to pick up the child we had promised to retrieve by ten so we very reluctantly headed home.

So, We Had A Little Storm

Just a little one, mostly wind a bit of rain. We laughed together at the weather radio, they said a few times that anyone outside in the path of the storm WOULD be injured.  We heard rumors that some corn fields up on the highway got hailed pretty good and thought we would drive past to see them when we headed to town for milk. That’s big excitement out here in the middle of no where.

Imagine our surprise when we got a call asking my computer guy husband to put a note on the school web sight that there would be no school Tuesday. “Why?” he asked. Well apparently there was a storm and anything outside in its path was injured. It ripped the roof right off the school auditorium.

I immediately texted a friend who lives in the path this storm took. She responded that no they had not come through alright. They got six inches of rain and three inches of hail, and hauled a horse to the vet who tried to jump a fence in the storm. He didn’t clear it and needed stitches the length of his belly.

Everything in the storms path was destroyed. Trees were stripped bare, grass was pounded into a pulp. Water stood in fields and had washed over the roads. The corn field had been hailed alright all that was left was stalks and ears, they looked like sticks stuck in the ground.