We are getting all the required fall things done. We got snowed on. Just a skiff that was melted by noon. (it snowed again last night, that snow hasn’t melted yet)

The Goblin Child’s class visited the pumpkin patch. They played and climbed and painted pumpkins. Of course we all went with.

The corn harvest is nearly done. It was short this year only two partial pivots. 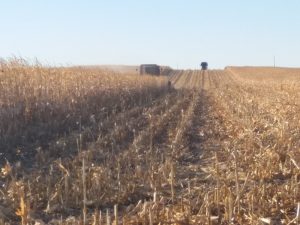 We had our pumpkin carving party. It was just as much fun as usual. Then we had fun decorating with ours. Then Rusty ate them.

The Goblin Child went to her first haunted house. I had told her many times about how going to a haunted house in Omaha with my dad was my favorite thing growing up. She asked a few times when she was going to get to go so I was thrilled when I saw there was going to be one nearby. We went for the early lights on tour,so technically 8 went through his first too! She loved it so much she wanted to go through again. Her father and I went through by ourselves half date half making sure it would be ok. We thought it was so she went through with Whitten and his parents. They held hands and led the way through. She still loved it. That’s my girl!

There was a scarecrow competition in town. Everybody made really great scarecrows and it was nice to see most of the town participating in a just for fun, fall spirit event. 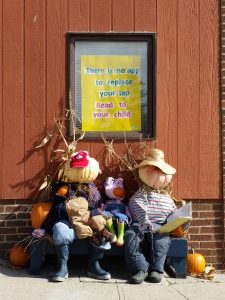 He makes a delightful little ghoul for Halloween.

But when the makeup is hard to get off, those eyebrows just kill me.

And then there’s this. He may be off to join the circus as soon as he’s old enough.

The decorations have been up for awhile now. The pumpkins are out and decorated, I need to write about the pumpkin carving party. Now the costumes are finished. We did a costume check yesterday since it was supposed to be our last nice day for awhile. I am madly in love with The Goblin Child’s Costume, until now her pirate costume was my favorite but I think this one may have taken it’s place. 8’s costume is adorable too, it didn’t get the time and attention of T.G.C.’s and we didn’t go all out, his face will be painted white when we go for real. Today it is cold and raining out, glad we got the pictures done yesterday.

Poor Coyote, he never thought he’d see the day. He’s taking it well though. We had invited Cade and Ava last summer to come ride with us when ever they could so next summer they could come along to any horse stuff we do. Cade has come once but Ava has been making a real effort and is doing wonderfully. Coyote has also been doing wonderfully, far better than I would have expected, as her lesson horse. Like Princess Onna does with The Goblin Child, he goes from his usual hot fiery Morgan to low headed and plodding.

The Goblin Child however does the opposite. The first few rides together she was pretty proud of herself zipping all around and showing off. Princess Onna takes that pretty well but even she has her limits.

I have been doing some clicker training with Onna though. I think it may be the perfect way to train a kids horse to get them used to and responding the the very different aids a child gives. Anyway, she is fairly well trained to come running to me because I am the one bearing treats. So any time there’s an issue she runs to me instead of taking off with her rotten little cargo.

The two of them on their horses are so incredibly cute. I love watching them ride around together.

Last time Ava was here to ride someone was being more than a little rotten and complaining because Onna wouldn’t go enough for her. So she got off and pouted and I got to go ride! Ava and I went out around the corn fields and had a very nice long ride. Baa came with and I thought it was going to kill her. She survived though. Not sure if that’s good or bad 😉

School has been going well I guess. The schedule for parent teacher conferences was difficult so we asked her teacher if there was anything we should know. She said everything was going great so we are skipping.

Meeting the bus is stressful but easier than driving back to town to pick her up. When the weather is nice we have been taking full use of the chance to ride out with the horses to pick her up. 8 is starting to ride Princess Onna by himself. He’s getting so big. Not big enough to reach the stirrups, but he refuses to use them anyway. His feet rest perfectly on top of them when the are set for The Goblin Child. I put them as short as possible once and he refused to even try to put his feet in them. Instead he hiked his knees up and put his feet on top again in jockey mode. He has no fear and happily turns around in the saddle as I try frantically, and unnecessarily, to keep him from falling. We are going to get him his own set of stirrups one of these days to use on the saddle his Grammy got him to use. He gets Coyote for his horse and things would work perfectly if Rusty was far enough along to ride with the two of them on their horses.

The Goblin Child is famous on the bus for her horse. A silly thing since we live in the country, all the kids should have their own horses. She is doing wonderfully with Princess Onna and still wants to be a horse show girl. She’s been enjoying riding with Ava when Ava has a chance to come take lessons. They are adorable together.

It Finally Happened To Me

Well, not to ME exactly. One could, and should, probably say it happened to 8.

We got a good hard freeze last night. The garden was still producing like crazy so we brought in everything we could. I had been picking beans off the over abundant beam plants and the kids have been helping shell them. This morning as The Goblin Child diligently shelled purple beans into the bowl, mixing them all around with her hands that were being blenders, 8 held a bean up to his nostril and laughed. I told him “no, beans don’t go in our noses”.

I didn’t really think we had finished with that but he left the kitchen and I turned back to beans and blender. Soon he came back laughing again and showed me his nose. Sure enough, way up inside his nostril, I could just see the round white bean looking back at me. I plugged the other nostril and told him to blow. Nothing happened. I took him up to the bathroom and grabbed the tweezers. By then it had come down a little ways and I was able to fit the tweezers around it and, push it back up higher into his nose.

But, it had come down earlier so we tried blowing again and out it popped into my hand.

I like to think this will have taught him a lesson but if it did I’m afraid the lesson will be more about how fun it is to stick beans up his nose than anything to do with NOT sticking things up his nose. Oh well, chalk this one up to another milestone met.

I need to write about our little trip to see family but first, this little aside.

The cousins were over. The kids were all out playing somewhere. I never worry about where exactly, Ava is there, she takes care of everybody. In the middle of getting super ready the back door opened and two rather rumpled children came in.

They were hesitant and looked worried. Apparently they had been playing in the old pickup cab sitting out in the tree row. Burdock is bad in the trees and right at head height. “Someone” hadn’t let that slow her down and plowed right through the thick of it. Now her hair showed the results. Her long fine hair was matted with clumps of the burrs and they had already pulled out all they could.

Laughing, because the alternative is?, we went to work. She begged me just to cut it off and spare her the pain. With the burrs against her skull I wasn’t going to hack it off without trying first. With hair detangler, fingers and a comb we fought at the table until it became obvious that it wasn’t going to be won that easily. Taking the battle to the bath tub we washed out the lovely pink color that makes hair nearly impossible to brush the coated her head with conditioner. Slowly but surely the burs began to relinquish their hold. Her back was red from scratching at the itchy barbs and the water needed drained a couple times to keep them from finding a new hold.

In the end her hair came clean, the enemy was vanquished and the battle won. Her beautiful hair is still long and attached to her head and hopefully a lesson was learned.