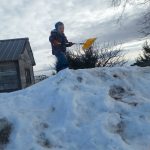 I have been meaning to get this up since before Christmas. Things got busy and I never got around to it. This was a very enjoyable play, in all three incarnations, produced by Ava and performed by The Goblin Child. They are so much fun!

The family was going fishing. A large portion of them including the cousins. The Goblin Child always want to go fishing this seemed like the perfect chance. The cold snap we’ve been having had frozen the ice on the lakes perfectly and the chosen day was supposed to be nice and warm. I chose to stay home with 8, fishing lacks the appeal to me that it has for the others and the thought of trying to watch 8 out on the ice all day. I just couldn’t do it.

They started off bright and early. The pond was a couple hours drive an they wanted to be there with plenty of time to fish. I think. They picked up uncle Leland and more friends along the way, in the end it was a large caravan headed to fish. The ice was thick, about 15 inches thick. No danger of falling through.

The fish were biting. The day was warm. It sounds like it was a perfect day. The kids spent the day running and playing, maybe fishing occasionally, and the adults sat and fished and talked. Everybody came home exhausted.

Finally Back To Christmas

We also got to enjoy another of Ava’s theatrical productions. This one was more interpretive than most.