A Little Snow For 8’s Birthday 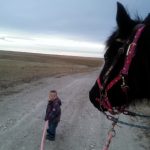 It was only last night (or the night before that now) that we were out in jackets, at sunset, going for a nice ride.

Today it snows. Lots of snow. In the drifts at least. I had been inside most of the day. 8 went to help feed and The Goblin Child and I went out to try to convince the horses to go into the barn. They didn’t stay of course. So we jumped at the chance to ride along to pick up the mail. I envisioned a fun jaunt through the drifts out to the mail box and back. Then we’d play outside for awhile.

In reality even the good old blazer had trouble getting going. Then we made it half way out the drive, with the ride going just as I had expected, before plowing into a drift and coming to an abrupt halt. At the top of the hill was a drift as high as the blazer, it’s bottom at least. We got stuck. Snow was backed in tight around the under carriage, it was not budging.

My brave and chivalrous husband walked back to get a tractor.

With the snowblower he dug his way back to us, pulled the blazer home. He and 8 went off to blow more snow while The Goblin Child and I went off to play in the snow. I don’t know how much we got, a foot maybe? It wasn’t too bad of a snow, nothing like our Christmas blizzard.

It was enough though that we cancelled 8’s birthday party. Poor little guy, they were looking forward to the bouncy houses. I think he is just as happy though out in the tractor this morning feeding cows and, probably, moving snow. We’ll try for the bouncy houses again next week.

Until then Happy Birthday 8!!

Category: 8 | 2 Comments on A Little Snow For 8’s Birthday 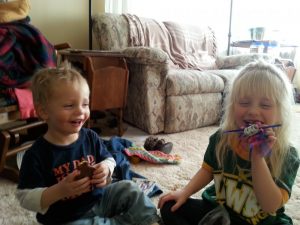