I’ll write something about it later…

Category: 8, Family, Goblin Child, It's a God thing | 1 Comment on The Christmas Program 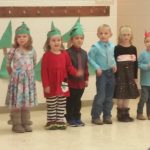 The Goblin Child had her school Christmas program last week. It was adorable. She had been telling us that she was going to be a mother and had been singing snippets of the songs. It was great to see it all put together.

The story was of three trees growing in the forest. A family, our G.C., that came along and chose the biggest one for their Christmas tree. A second family came along and chose the second biggest. The littlest tree was sad that no one wanted her. Then the birds and bunnies came and decorated her and a star saw and came to perch atop her. It was very well done. The music teacher always does an excellent job with all the programs. And we enjoyed it immensely.

Because She’s So Cool

The Goblin Child has been wanting to learn to read. She wants to be able to read books whenever she wants, instead of having to wait for us. She’s been working hard at it and always wants to know how words are spelled. Tonight as we read her bedtime story, or started to, she said no, she wanted to read it herself! And she did.

Category: Goblin Child | 1 Comment on Because She’s So Cool

We will be going to the beautiful little country church near us for Christmas eve again. To get ready for the play on Christmas we’ve started going there now and will be until Christmas. The Goblin Child will be Mary, with her little best friend being Joseph. His little sister will make a beautiful angel and 8 will be a dragon. Or maybe not, but there was strong vote put in for it. I could see the biblical implications, the demon hovering nearby, always present, always watching, we might still be able to talk them into it. If not he will be a shepherd or possibly a wise man.

At the last practice they were enthusiastic and energetic. They remembered their lines and did an excellent job singing. Hopefully they do as good when it’s time for the real thing.

Category: 8, Family, Goblin Child, It's a God thing | 2 Comments on Getting Ready

I can’t believe it’s been a whole month since I wrote here last. Time flies and every time I think about writing I’m just too tired. It’s been a busy month and hopefully I’ll get back and recap it but for now I’ll stick to the now.

Last year we meant to get up to Storybook Island to see the Christmas lights. Reservations were made, plans were set, then the forecast was made. They were predicting a HIGH of zero and dropping from there. We decided it was too cold and canceled. This year we decided to try again.

We left early trying to make it up for lunch. We got there and went straight to Huhots. Our good friends brought their kids along and met us there. We gorged ourselves then went downtown. Last year they put in an ice-skating rink, this year we got to see it. The downtown was gorgeous with Christmas lights up and beautiful buildings. We rented skates and ventured onto the ice. It was a blast. Quite possibly my favorite part of the trip. They had walkers to save us from falling and we pushed all of the children around and round until they got the hang of it and were able to move themselves. Or ran crying from the ice and played happily on the stage nearby, eating dirt and running up and down.

Once our feet and bodies were too sore to skate any longer we walked around the downtown window shopping and taking in the sights. We wandered happily until dark and finally it was time to go see the lights. we got to Storybook Island before it opened and walked around waiting very impatiently, the children at least. Once the door opened we rushed in and ran frantically about looking. We saw Santa and Mrs. Clause, the nicest ones I’ve ever seen, and collapsed in a heap of exhausted tears at being told not to swing from the rail of lights to keep us on the path. It was a very long day for a small child who refused to nap on the long drive up.

He was able to be rallied, or at least carried, and we continued through the park. The lights were great but prevented playing on all the toys, a bit of a disappointment for all the small children. They got their ride on the train though and then were ready to find our way back to the hotel for some of the swimming we had promised them and supper.

The pool lived up to their expectations I think. I hope. With it’s big water slide and little pool, known to some as a hot tub. We don’t let the signs worry us, they don’t really mean no one under 18 allowed. It was packed with small children anyway. The whole pool was packed. It limited my enjoyment but I don’t think it slowed the kids down, instead it gave them even more playmates. We enjoyed delivered pizza at the pools edge then succumbed to exhaustion and our rooms for the night.

The children actually slept! Ours did that is and for the most part, our friends maybe not so much but small babies are that way. It was one of the more pleasant nights we’ve spent in a hotel with our small rotten children. Usually they refuse to sleep and are up all night. They were up bright and early the next morning to make up for it. We had snacks in the room for breakfast then waited for the pool to open.

It was lots more fun to swim that morning. There were no other people, I like things best that way. We soaked in the hot tub and made laps down the slide. Checkout time loomed though and we had more plans for the day so eventually we had to drag them away.

It was time for our brunch where the kids all refused whatever we had gotten them and only wanted what the other kids had. Finally after lots of switching around everybody had something they were willing to eat. We stuffed ourselves then went shopping.

The mall was packed. It made me so glad that we don’t live in town and have to put up with these things regularly. We fought our way through and I was glad to have a friend there for moral support as we shopped for other forms of support and I got my early Christmas present. So glad to have that support and to have that over with, hopefully for another decade or so 😉

with everyone nearly burnt out on the whole vacation thing and very ready for a rest we went to dinosaur hill. Although dragging and showing some definite signs of a new sickness we trekked up the hill and had one last hurrah as the kids climbed and ran about. I’m always scared we will lose one off the side but it didn’t happen this time. Maybe next. The Goblin Child was done. She stomped back down the hill ahead of us refusing to speak.

By the time we got home 8 was well rested, feeling better, and rearing to go. She was very clearly sick, exhausted, and refusing any medication. She ended up sleeping on the couch for the night with her loving father. Her voice was hoarse as she croaked out requests and she was coughing horribly. She seems to be better this afternoon but does so enjoy the drama of a good sick.