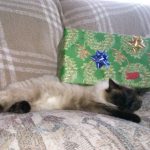 Twenty eight below last night. The night before was only four or so below. We have been letting the cat and dog inside at night so they don’t freeze. The cat was nowhere to be seen night before last though, so with a slight feeling of relief that it wouldn’t be inside to wake us up in the middle of the night we left it out.

The next morning it was waiting at the door and dashed inside as soon as it was opened.

We ate breakfast then began our many treks back and forth through the house chasing the child or fetching for her.  Soon we noticed a stench about mid house. Looking around we decided the floor was free of animal leavings. Poor Daisy originally received the blame, she had been in all night and was still refusing to set foot outside and the cat had just gotten in. We looked over and under furniture and finally remembered the litter box.

I am not a big fan of cats, not indoor cats for sure. When our cat it was a tiny kitten and spent most of its time indoors so we got it a litter box. The box got used regularly for the first year, almost. Then it became a good little kitty and started going outside where all good animals go. We left the box for emergencies. Like cold winter nights when it gets to stay inside. It hasn’t been used for almost a year now, but we leave it still just in case.

Now it had been used. Well used. Apparently it is too cold to do that sort of thing outside.