The sun shone bright under dark clouds as I picked the kids up from the bus. They had gotten rained on in town. Here there was no more than an occasional mist.

At home they hopped out at the corn field. A small corner had been wind-rowed for hay and was more appealing than they could resist. They were going to pick up some ears! I just happened to have a bucket in back of the pickup. They were set.

I went on to the house and started feeding animals and gathering from the garden for supper. The footsteps of my daughter echoed through the yard as she ran for the house. I waited until she got to the door then yelled at her from where I was hidden under tomato trees. Apparently she was looking for me, not headed inside. She ran towards me then, gasping out of breath, and saying…   something.

It took awhile before I could catch it. There was a rainbow. With the misty rain coming down in bright sunshine that wasn’t surprising. They had found the end of it though! Come quick, we could catch it. Looking around I could see it. There at the edge of the stackyard, into the cornfield. The rainbow came right to the ground. There was no way I was running that far. Instead I ran the other way to the shed.

On the fourwheeler I picker her up then we went for her brother. All children gathered, we took off after that rainbow.

It was no longer at the edge of the corn field. We chased it through the middle of the corn, down the sectionline, then stopped on top of a hill to look at it over a friends house, way off at the highway, We were too late. Too late didn’t make it any less fun.Who needs a pot of gold wen we have all the riches we could want right here.

Turning for home the kids asked me to come pick more corn with them.

After a busy day I still had chores that needed done, there were dirty dishes in the sink, and supper to get on the table. I paused with all the reasons I couldn’t on the tip of my tongue.

Sure! I said and we wen off to play in the corn. Some opportunities are to great to let slip by. 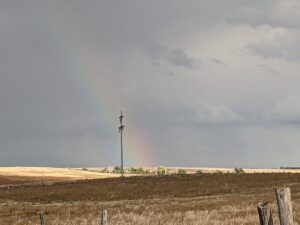 Posted October 6, 2022 by Neversummer in category "Family", "It's a God thing