It was perfectly still.

With the fourwheeler shut off the silence echoed in my ears. It was overwhelming, nearly deafening. The absolute lack of sound came as a shock. We get so used to noise in our modern lives. The hum of electronics, radios droning on, people, vehicles. I stood for a moment and listened. I remember thinking how there wasn’t even wind through the few scraggly trees.

It’s my favorite old house. The one I would choose to live in if I could pick any of the houses on the place.The practicalities of modern living make that impossible of course. As much as the completely fallen down state of the house. There’s no road in, no electricity, no hope of internet. Just a house sat out in the middle of a pasture. The roof is gone. So is the floor. Walking upstairs would be suicide, even though the stairs are technically there.

Not too long ago the carcass of a yearling bull had hung from the floor joists. He had found his way in through a missing wall or maybe the door. A part of the house has a cellar. The floor wasn’t enough to hold his weight. With front and hind legs on opposite sides of the joist I will hope that his back was broke when the legs went through. If not, he hung there until he died, fragments of skin held the skeleton there as a grim reminder not to take chances with a falling down house.

Now his bones shine white under the house.

Shaking off the eerie stillness I went back to work. My job was to keep any more cattle from sharing the young bulls fate. We wanted to make use of the grass growing around the house, but keep cattle out of the house. One wall is gone and one door easily accessible. I had to fence them out. Walking about the house, hammering and stretching wire, I looked down and saw a penny! Picking it up I recognized a design no longer used. Peering through the pattena I thought I saw 1929. Excited by my find, but busy at work, I slipped it into my pocket, it could be cleaned up and inspected closer when I was done.

As I nailed wire to the house bits of plaster and dirt rained down on my head. It made me keep a wary eye out above. As the walls begin to bulge out at odd angles it’s easy to imagine the whole thing coming down on my head. More and more pieces of trim and eaves are being scattered across the ground with every wind storm. This beautiful old house only has a short time left. There’s not enough left there to save.

Once home I was telling my husband about fencing out the house. About the silence there. How everywhere else I traveled through the day, fixing fence and moving cattle there had been the noise of wind, cattle lowing, distant traffic. But not there. There had been silence.

Which reminded me of my penny!

Excitedly I dug into my pocket to show him. Searching the depths I found only lint. Then the other pockets just to be sure. Nothing.

They kept it, he said. 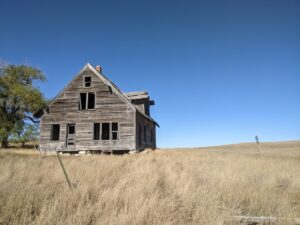