We were cruising down the road, The Goblin Child and I. Should she have been in school? Probably.

At the last second I saw a snake stretched out across the road. My wheel was lined up with it, I never swerve, too late to hit the breaks. I was looking in the mirrors trying to see if we had hit it, talking to The Goblin Child, asking if she had seen that. Just then as I was distracted I looked back ahead and saw a herd of deer along the road hidden in the shade of a tree. Thinking how funny it was that we could have almost hit the deer and the snake I was caught by surprise again as one of the deer jumped into the road in front of us.

It takes loner to write one word of the story that it did for all of this to happen.

We didn’t hit any deer. I did slam on the breaks and finally come to a stop. We watched the does and young bucks gracefully hop away. Then backed up to see about the snake.

I love snakes and we are blessed with huge beautiful bull snakes in this area. They eat snakes and legend has it that they keep the rattle snakes away. They may bite but are not venomous. I guess their size and that combined with the lingering fear of any snake that people seem to hold to means we often see the giant beauties dead along roads where people swerve to hit them. It makes me sad and I didn’t want to be a member of that club, even if it was unintentional. We backed up hoping to have missed it, but instead saw a snake still there in the road.

This road is gravel, we weren’t baking down or parking in the middle of a real road. I feel I should mention that.

Pulling alongside the snake I leaned out my window for a good look. Just in time to see the snake strike at the pickup. A rattle snake! But bull snakes will pretend to be rattlers, I couldn’t be sure unless I could see the rattler. The snake coiled and hissed. Then I saw it there. A rattle, shaking enthusiastically at us. I told my daughter to climber over to my side and see this!

We are lucky not to see rattle snakes at the house. Not for as long as I’ve been there. I credit the big bull snakes we consider pets. She’s never actually seen a rattle snake. We look, me fascinated, her disgusted. We hadn’t missed the snake. It was injured, it’s insides spilled onto the road, it just wasn’t dead yet. We looked and talked, then  I backed up farther and took careful aim. As we went over the snake again I asked one more time if he understood why we were killing the snake. She said yes, she understood. Even if it was in that disgusted teenager voice she was still able to repeat, we needed to end the suffering. Rattle snakes have a purpose in life too, we don’t kill them just for the sake of killing. When an animal is suffering the kindest thing we can do is quickly end that suffering.

The deer were long gone as we passed the shade tree again. Corb Lund played loud on the radio, singing about cows, as we drove on home together. 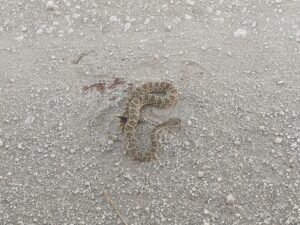