We started the day bright and early, 8 likes to wake us up by six on any day we would otherwise be able to sleep in. We scarfed down a delicious breakfast and Tanna arrived to help sort pairs. 8 went out in the tractor to help the men feed and us girls saddled the horses. The Goblin Child wanted up behind Tanna and I rode Coyote as usual. We got them sorted in record time, they quite literally ran out the gate. The Goblin Child clung tight and was a real trouper not complaining all the way though.

Once in the lane they needed to go all the way out to the farthest pen, clear at the top of the hill. I got off to get gates and decided not to get back on. I had gotten off and on so many time I was clean out of cake, Coyotes reward for letting me on again, and baby calves can be much easier to move on foot. Leading Coyote along behind me I looked over at Tanna and The Goblin Child double on Onna and realized I could do something about it. I put The Goblin Child on Coyote.

At first he got to stand and eat at the trough while we tried to get the calves to move. Then I would grab a rein and bring him along a few steps then let him eat, try to convince calves to move. As we slowly progressed up the hill The Goblin Child began to move Coyote along by herself. Once we reached the circle at the top I turned her loose to push the cattle through the gate with Tanna. Poor Coyote. He put up with it for a little while then said that he was done, he’d had enough. Please save him.

After closing the gate I climbed on behind my saddle and let The Goblin Child steer us home. It was terrifying. Not just having a small child who had no control in charge of my hot, grouchy horse, not confined in a small area but on the way home, but also sitting right on his haunches. He’s bouncy. I thought for sure I was going to fall off.

After unsaddling I turned Coyote loose to graze, surely he deserved a reward for putting up with all that. The guys had been planting oats and I was going to keep a very close eye on him to make sure he didn’t get into the planted field. I forgot he was out there. As we were getting ready to leave that afternoon I remembered Coyote. I ran out the door frantically searching for him. Behind the house I caught a glimpse of his butt disappearing behind a shed. Running back there I found The Goblin Child leading him to the gate. She informed me that she was putting him away for me and indeed she was. What a good, big girl! 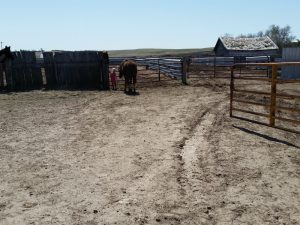