The Aftermath And A Knight In Brown Carhart 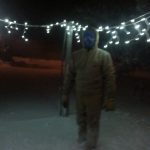 After I left off last night we went to bed. All day the lights had been flickering and we heard reports of people with no electricity. But we still had light and they never went all the way out, at least not for long when they flickered so we didn’t do anything. As soon as we got settled in, warm and comfortable, the lights went out.

As we discussed the ramifications of that and the probability of them coming back on, probably not, and what should be done about it, the lights came back on. It seemed unlikely that they would stay on but we had also thought it unlikely that they would come back so what do we know. Still we decided that we should be prepared just in case. And my brave husband headed out into the great dark white.

I lay in bed awhile until the guilt of being warm and comfortable, and the uncertainty of wondering if he was ok and what he was doing, became too much and I got up to look for him out the doors.

He had gotten in his blazer, it started no problem but wouldn’t go into four wheel drive. He started my pickup, she always starts and was already in four wheel drive, I had been out driving around earlier. The windows were froze and could not be seen through. Starting the defroster he left it and went to try the blazer one last time. It went into gear! He drove it around to the front of the house and it stuck in the deep drifts covering the road. He walked the rest of the way down to the quanset and got the payloader. The door was drifted shut. He rearranged vehicles until it would fit out the other door and plowed the yard out, pulled the blazer out and put it back in it’s parking spot, then used the payloader to haul the generator back to the house along with jugs freshly filled with gas. Then parking the payloader in the qunset, backed in so it could dig its self out if needed, he walked home into the wind visiting with the curious horses who followed him along his way.

So, because of the work he went to preparing us for the worst, the electricity stayed on all night. 8 even slept through the night! We were moderately well rested the next morning when my Carhart clad knight was up and at it bright and early again. Walking through the snow back to the quanset he got the payloader and did some more plowing then went to find his parents who had holed up with his sister for the night after driving off the road in zero visibility.

He plowed her driveway and called around to see if anyone knew who’s cattle had drifted into her yard in the storm. 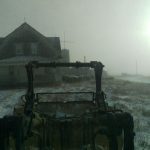 They had found a large open shed and the shelter they had drifted seeking. There was a horse out with them who herded them back towards the shed when they started to wander. Apparently they had come from across the highway and down the dirt a ways, yet another reason not to be out driving in white out conditions, hitting a cow would hurt.

Then he, his father, a friend and a neighbor went to find the pickup. The neighbor had picked up his wife’s niece the night before and gone back to pull her car out already that morning. She had passed her turn before sliding off the road, unable to see it for the snow and he had a 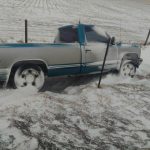 hard time finding her, she didn’t know where she was. When they reached the pickup it was precariously balanced between a metal post marking a culvert and the sharp drop off of the culvert, on the west side of the road they had been north bound on. A few inches to the side and they would have dropped the wheels into the culvert and hit hard. It took some fancy maneuvering with the payloader to get it lifted off the culvert to where it could be pushed out. They ran into other neighbors also pulling the car of elderly parents out of the ditch a little farther along. Everyone must have decided to go driving.

When he finally got home late in the morning he scarfed down a quick breakfast then went to finish plowing. The cousins came over and everyone went out to play. All day was spent sledding, climbing and playing out in the deep drifts hopefully they will sleep well tonight.