The Great Christmas Blizzard of ’16 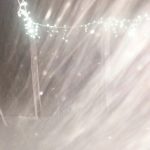 Not what I originally meant to write about. I will get to Christmas as soon as I can.

The morning started with rain. Freezing rain. There was a sheet of ice on, everything. Then little pebbles of snow and when The Goblin Child was getting her book read at nap time I had to stop to go check out the noises coming from outside. It was large wind driven hail.

That was when I went to check on the horses. My hard working husband had opened the gates earlier so they could get to the barn. They are not smart, they stood huddled behind the wind break. I have been working with Rusty on learning to go out around the wing fence and it payed off, he came running with the other two not far behind. I lead them up to and into the barn where they could be warm and dry. Onna refused. Coyote and Rusty came in but it didn’t last. I left feeling better that they knew the barn was open and they could go in if it got worse.

Immediately after I got in, it got worse. The hail turned to fine powdery snow. Visibility dropped to nothing and the drifts began to grow. Late in the afternoon I went out again. I had filled the bed of the pickup with hay in preparation and I backed it over to the barn. After going in the passenger side door because the drivers side was froze shut. The windows were covered with ice and the snow was blinding even if I could have seen out. Backing blindly across the yard was interesting to say the least.

When I got over there I was disappointed not to see the horses. Silly ponies, they were back out behind the wind break again. Wading through the snow a hand over my face to block the wind I walked out to them, convinced them to come around the wing fence again and lead them to the barn. Even Onna came in without hesitation this time. I forked the hay from the pickup in the door and spread it into many piles so everyone could eat. In their snow masks they presented a terrifying sight.

I left content once again that they were warm and safe and dry. I didn’t lock them in.

Tonight my fearless husband braved the storm again to shut the shop door that got left open when the in-laws took a pickup to go visiting for Christmas. He offered to check the horses for me. Of course they weren’t in the barn. I gave up. I wasn’t going after them again. They were in the barn, they knew it was open, they even had hay in there. Apparently they didn’t think it was too bad out.

Hopefully come morning the wind will have let up. Hopefully we will find the animals all healthy and having survived the storm. The cow heard is in the corrals with good wind break, as long as everyone came in. The calves aren’t as well protected. And the horses, well, they had their chance. The in-laws are at the cousins house, not heeding blizzard warnings they drove home in it, left the pickup in a ditch somewhere in between and managed to make it the rest of the way with the cousins. They wisely didn’t try the drive.