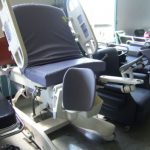 We were required to take a class to learn how to be pregnant or give birth or something. All I really got was that I had to be up from six in the morning till after eleven and up again by six the next day, but I got to eat out and they served a beautiful fruit salad.

In the first class we spent the whole three hours giggling over the breathing. It’s a wonder we don’t get kicked out for talking in class, making dirty jokes and cow references. I lived in dread of having to watch the video in the second class. The video was awful; I’ve seen lots of cows do this why should I be forced to watch a person? It seems to get better with each class. They were smart enough not to warn us about the c-section video. I enjoyed it much more than the birthing video. Blood and gore never has bothered me. They showed us huge needles used for epidurals. I giggled (more) thinking of how I have had to give the horses shots since I was a small child. Mom will pass out at the sight of a needle.

Then we got a tour of the rooms. She showed us a bed that cost fifteen thousand dollars. She asked for volunteers to try on the baby monitor. I said no. I am my husbands favorite, non computer, toy though so he volunteered me.

I think I got a good glimpse of what giving birth will be like. There was an audience as I clambered awkwardly on to the bed. My belly was exposed to the public as they wrapped straps around me. The monitor was cool we could hear the heart beat and lots of gurgling. I swear it was just the baby moving.

Then we got a demonstration of why the bed was so expensive. They began ripping covers off to display its guts. While I was still in it covered in straps, by the way, so I could demonstrate the positions. The innocent looking bed had foot braces and stirrups, a large cut out with  a built in trash bag underneath for catching a baby if it gets dropped. OK she promised that wasn’t what it was for, but who knows it could be handy for that. An exercise bar. All sorts of strange and scary extras.

What happened to the way it’s done in movies where she get to just lay there? I didn’t sign up for doing squats.