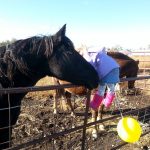 We are trying to get outside as much as possible. I can feel the last good days slipping past quickly. Not that there wont be occasional nice days through the winter but they may be few and far between. It has been getting colder at night, upper teens the last couple. Everything is well frozen except for my beautiful, hardy petunias. I’m covering them, maybe they’ll make Thanksgiving.

The corn harvest is still sputtering along. It rained then stayed cloudy, they tried anyway and stuck one semi in the mud, locked up the wheels on the other. That didn’t deter them long, the next morning they were back at it. Making repairs, unsticking and off to try the neighbors dryland corn. It’s a little dryer so they will go on it for awhile.

Today’s good weather is inspiring some horse riding! For everybody. The Goblin Child and I went out during 8’s nap. I couldn’t decide if we should both ride Coyote, so I would get to ride too or if we should saddle Princes Onna and I would walk. The Goblin Child decided we should take both horses so everyone would be happy. I have been hesitant to pony Onna while The Goblin Child rides, that’s a lot of hooves should she fall. But she had made up her mind and who doesn’t let a three year old make important decisions like that? It was what I really wanted so she didn’t have too hard a time convincing me. And it all worked out great.

After lunch Ava came for a ride with me. She and I used to ride all the time and I’ve missed our rides together. I kept Princess Onna on the lead rope just to be on the safe side. Onna was pretty zippy but Ava did great even though the stirrups would not adjust properly. I think next time we will leave them long so they are out of the way and not even try to use them.  We  got back and The Goblin Child saw Ava riding her horse and wasn’t sure she was ok with that. Then decided that if Ava was going to ride her horse she should get to ride with her! I said no they could not ride double, I’m so mean. But she got on behind me and we made one lap around behind the house and she thought it might be alright after all.

If all goes well maybe we can do it again tomorrow. 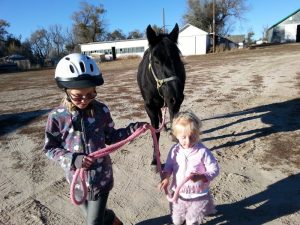