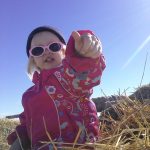 The weather turned cold again. It is January after all but the warm weather was nice while it lasted.

We fed the cattle this morning as usual and when we finished the neighbor who has been helping feed showed up on his day off to help get more work done. Much to the child’s delight out of the pick up climbed his boy too. She marched up to him and proclaimed him to be Jack. And yes, yes he is.

She then proceeded to follow him every where. As their fathers discussed the work they were preparing to embark upon she demanded her fathers hand so she could offer it to Jack to hold. He wasn’t interested, strangely. He was very nice about it though, very nice to her all around. She demanded Jacks hand and he let her hold it as she led him where ever she wanted.

They, with me trailing behind, followed the guys as they got the battery charger on a tractor and wandered back towards the house to get a pickup. She began demanding “Jack home, Jack home too” as she drug him that direction by his finger.

It is pretty cold this morning. The wind that came up is damp and brisk. The guys walked with shoulders hunched and hands in pockets. I think Jack was happy to be diverted indoors. His dad commented as they headed off that we ought to be a bit worried about her and as she sits on the floor playing with the boy that she kidnapped I think he might be right.