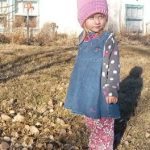 The weather was beautiful today. So much so that it was hard to make ourselves head to town and church. As a compromise we went outside to play for awhile before getting ready. Somehow an impromptu game of hide and seek broke out.

It was the child’s first time playing and the rules were a bit sketchy. She had a tendency to peek and give orders as to hiding places but we all had a blast. Her father helped her stand against a tree and count the first time as I stood behind a small leafless bush. Children are amazing. She stared straight at me through the branches without seeing then with a little help and nudging she was squealingly delighted to discover me there. Then her father hid. He’s a good hider.  By the time we counted to three he had disappeared. He wasn’t behind the bush. He wasn’t behind the barrel. He startled a particularly loud squeal from he when she discovered him behind the bunk house.

She wanted a turn at hiding too. Usually leaping out at us before we had a chance to find her. We of course jumped and squealed appropriately. The game could have gone on all day but it was time to get ready.