Only my mother will (may) get that reference.

But anyway, we planted seeds. My tiny little petunia seeds shot up, again. The seeds of the plants for the greenhouse are taking a little longer much to the dismay of my impatient gardener husband. It’s amazing how those incredibly small seeds can produce such huge beautiful flowers.

I have gotten a surprisingly large amount of riding done this week. Twice. That’s pretty impressive for the way this winter has been going. I think I have made it out once a month, if I’ve been lucky, all winter. Earlier this week I put The Goblin Child down for her nap and grabbed a halter to catch Coyote. The child and I had been outside all morning playing in the unusual warmth of the day and I couldn’t wait to go ride. I stepped out the door only to discover it was snowing. I was determined though and decided that at the very least we would plod around the yard.

The snow was so beautiful, gigantic flakes floating gently to the ground with barely a drop of wind, that we headed into the corn field. Coyote was spooky and hot while dragging his feet and trying to convince me to turn back. I thought things would get really interesting once we turned around, but no. He walked faster and that was all. He walked that walk that would have won walking races that were held back when horses were used for transportation and it was important to have a walk like his. He zipped and bounced and we flew home in half the time it took to get out.

Then again on Tuesday, he was at the gate begging, probably for grain not riding but he shouldn’t be begging anyway maybe this will teach him. It was cold, ten degrees maybe, we kept it short but sweet. I keep telling myself, and anyone else who will listen, that spring is coming and soon we will go outside again. 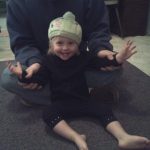 Last night The Goblin Child was playing at our feet as we watched a little TV. She scrambled on and off of the couch honing her new climbing skills. Finally as her bed time drew near she grew tired of that game and tugged at her father telling him to come with her. He pulled his hand away and jokingly told her to go wait for him in bed and he would come read her a book. She turned away and we continued our movie.

Next thing we knew she was headed down the stairs. She went to the kitchen table and got her sippy cup down then turned to her bedroom door. We paused the movie and her loving father went to keep his promise. He said they actually ended up reading three books but if a eighteen month old child is going to follow orders like that I think she deserves as many books as she wants.