Fortunately 2013 was not nearly as exciting as 2012, nobody can take that kind of a year twice in a row. This year our Christmas letter will be almost completely child-centric. It was a year of firsts for Elly.

January: Elly sat up for the first time this month and we began ordering seeds for this year’s garden.

February: Elly started eating solid foods, her first taste being cherry mash given to her by her father. We started the garden seeds indoors, hoping to hurry spring along.

March: Megan took Elly for her first ride on a horse and she got her first taste of garden dirt. We took her on her first vacation to see Aunt Doris and Megan’s entire family in Lincoln and Omaha, after which we all got VERY sick with the stomach flu.

April: Larel took Elly for her first four wheeler ride and we planted potatoes just in time for the big spring blizzard. A few calves were lost but we faired better than many.

May: We had the first hail storm of the year but it got the rain started and it didn’t shut off all summer. We stayed busy planting the garden, taking cows to pasture, and planting corn in the fields.

June: We got many more hail storms the worst of which missed us. The garden thrived and we feasted on produce from the greenhouse.

July: Elly enjoyed a busy first Fourth of July. We watched the parade in Crawford and took our yearly pilgrimage to Hot Springs, SD to purchase fire works and partake of homemade ice cream. Elly liked the fireworks although her bed time interfered with her enjoyment of the night. To celebrate Elly’s birthday we took a trip to Omaha to visit her grandparents, uncle, aunt, and cousin. Also, we stayed at the Lied Lodge and explored the arboretum in Nebraska City.

August: This was an extremely busy month for us. It didn’t help that school started on the 7th this year. Larel didn’t feel like he had enough time to get all the work done he needed to before the kids and teachers started showing up at school. Elly celebrated her first birthday with family and friends, and lots of food and cupcakes. Larel saved a small kitten from the middle of a road and thus, Elly gained her first pet cat. Unfortunately for the kitten, Elly also took her first steps and started walking during this month. By attending his class reunion, Larel was forced to recognize that it was over 20 years ago that he graduated high school.

September: Elly’s Aunt Shannon graciously agreed to watch her while Larel and Megan drove to Scottsbluff to see the Marty Stuart concert. It was totally awesome by the way! It’s too bad music on the radio today isn’t as good as that was. There was a terrible storm that went through Hay Springs, bringing large hail and strong winds. During the storm, the roof was ripped off the high school auditorium. Repairs are still being made to the inside of the building.

October: This month started off with a full-on blizzard. We all agreed that it was way too early for that much snow, but it didn’t stop the storm from dumping on us. Elly’s grandma and great-grandma were here to see her dress up as a cow and take part in Moonlight Madness in Chadron. Several days later, Elly dressed up as a Nebraska cheerleader for her first Halloween.

November: Corn harvest came and went but not before Elly had her first combine ride. Our church provides care for children while parents attend service. We had been contemplating leaving Elly with the other children in the nursery and finally got the courage up to do so. We needn’t have worried…in fact, Elly actually cried when we came to pick her up because she was enjoying her new friends so much! Megan has started a 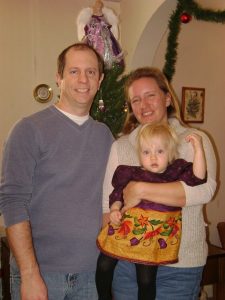 store on etsy.com selling child’s dresses and antiques, it has been quite an adventure.

December: Since we didn’t travel back to visit Megan’s family last Christmas because of young Elly, this year we will be making the trip. Because of the nightmares associated with flying and driving, we are planning on taking a train to Illinois. It remains to be seen if it’s less of a nightmare, but it sounds fun at this point. It will be a first for both Larel and Elly! And last but not least Megan got Elly a horse for Christmas. It is a little early, but you have to start out the child on the path they shall follow.