Quite a few years ago, our youngest was just a baby, I said sure, I could drive the semi and haul a load of hay. It was just a couple of miles from home.I could handle a stickshift semi that far. I can drive a stick. Learned to drive in one, the memory of which is still mocked by my loving mother. Once you can drive a stick you can drive any stick. From a tractor to a pickup. It’s a good skill to have.

I drove over to the highway and around the field while my husband loaded the hay trailer. Then headed for home with a full load of hay. All was well until I got to the big hill between our house and the hay field. The semi lugged up the hill then died.

I let it roll backwards down the hill, keeping on the road with my superior driving skills 🤦🏼‍♀️ Double checking to make sure I had it in first I tried again, and again, and again. Before I finally called my husband nearly in tears to come back and save me.

He came back, hopped in, and drove home.

I followed on the fourwheeler fuming. When he hopped out at home perfectly happy and cheerful to inform me that I had forgotten to shift out of high range. that was the closest we’ve ever come to divorce.

This weekend we worked the calves and hauled them to pasture. On the second load, in the heat of the hottest day yet this year, the pickup I was driving with a trailer full of calves decided it was done. I feel I should mention here that the calves are hauled separate to keep the cows from smashing them. As soon as they all get to pasture they will be reunited.

Anyway, with a trailer full of calves, their moms in the semi ahead of us with my husband driving, the pickup decided it couldn’t make it up the big hill. A different big hill this time.For years it has had issues going in the heat, it lugs and lurches. The mechanics can never find the problem because it only does it in the heat with a trailer. Today it was done. After coasting down hill and pushing as hard as we could from the inside to help it make it up the hills, it had come as far as it could.

The pickup was dead.

I backed it down the hill. Managing to keep  on the road this time too. Called my husband to come save me and hopped out with our son to sit beside the road. I notice a few themes to my life.

It was HOT out.

The mechanic said he would drive out from town and take a look at the pickup. A neighbor drove by in his pickup and trailer, he stopped and asked if we needed anything. There are so many good people out there.

The mechanic got there diagnosed it as a fuel pump issue, realized we had a load of calves on and offered a ride to the pasture. He quickly hooked a tow rope from his pickup to ours. I wanted nothing to do with this. I feel I should mention this is all on nearly deserted gravel roads. So I said I would go take the semi. Even a fully loaded cattle pot would be easier than a pickup towing a pickup and loaded trailer. I climbed into the air-conditioned cab of the semi that had been idling patiently as it waited. After the heat of the day it felt heavenly. I looked around and realized it wasn’t the automatic semi. It was the stick shift! The one of my former epic failure.

I checked to make sure it was in low range. I looked at the chart on the visor to make sure I knew where first was. My first guess would have been reverse. I have driven this semi hauling hay over the last couple of summers. The epic hay failure wasn’t the last time, just the most memorable. When you drive something three or four times a year the basics don’t come natural. I got it in gear. Didn’t kill it taking off. I was well on my way to making it the few more miles to the pasture.

Up through the gears. I did remember how to shift without the clutch. I was feeling pretty good until we got to the downhill side. With a heavy shifting load of cattle on behind thirty five miles an hour feels like sixty as I eased down the hill. The turn was at the bottom I’d have to downshift. Never my forte. Far easier to come to a complete stop and start again at first. I remembered to shift to the low range! Prove that positive punishment can be effective, if miserable, training.

Finally I made it to the pasture. Now all I needed to do was pull into the narrow driveway so the trailer could be backed across the road and into the pasture. While my husband, child, and the mechanic watched. As I slowed to make the turn at a creeping rate, I let off the clutch and the engine lugged ad nearly died.

I had forgotten to shift to low range. Here. Now that there was an audience.

Quickly shoving the clutch back in before it actually died I rectified the problem. Missed the corner post with the trailer. Left the semi sit for my husband to back into the pasture!

That was enough excitement for me for one day.

The cattle unloaded. Mechanic and husband left the trailer and towed the pickup on into town. Son and I sat waiting to be rescued with a different pickup. It was hot. I convinced my son the tank would make a good pool. It was all good. Hard learned lesson had saved me from making a complete fool of myself and the cattle were out of the hot trailer onto the good green grass where they will spend the summer being feral and fat. 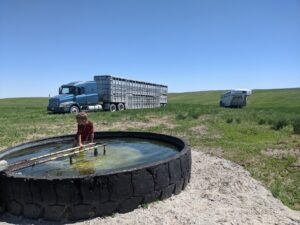