Late one night I sat on my computer looking at pictures of old houses. In one of them there was sign of a fire that had occurred many years ago. I noticed my mom was online too so I sent her a link. She should get to enjoy the pretty derelict old houses with me.  We started talking about the cause of the fire and began concocting stories to explain it. I loved our story too much to let it go there, so here it is. A very fictional (maybe) story of a ruin. With pictures! 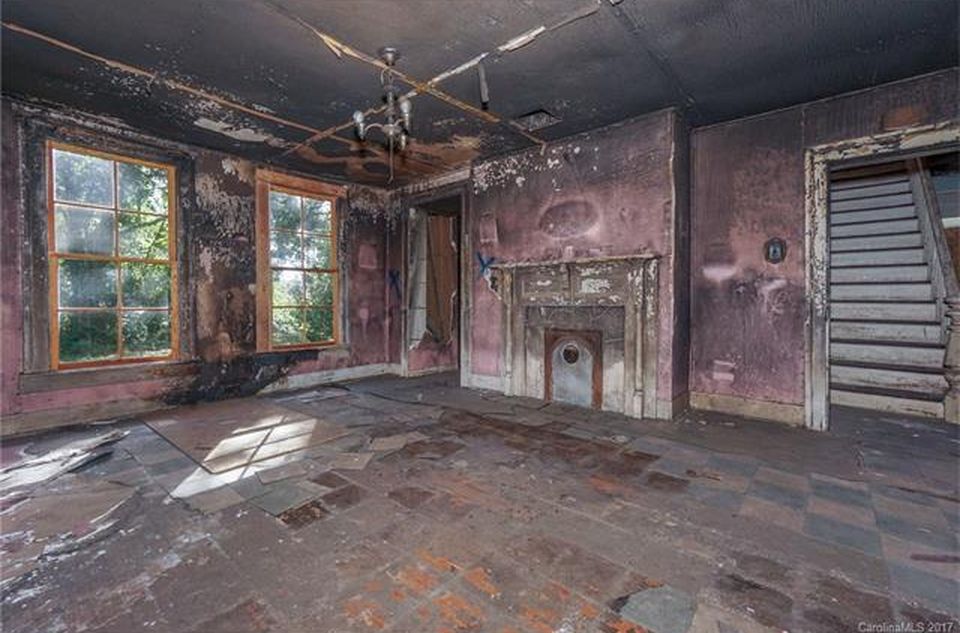 Me: How do you think the fire started?

Mom: I hadn’t noticed the fire. Maybe the fire place?

Me: No, the fire was by a window. Not to big of a fire but lots of smoke damage.

Mom: It does look like that. Wonder what happened. Your theory?

Mom: Mine was the fireplace…  Maybe someone hated them and threw a burning ball of rags through the window. Before it could do too much damage they found it, fought through the smoke, and extinguished it.

Me: (ever boring) Much more exciting. But the worst of the damage is directly between the windows against the wall, if they threw it through the window I would expect it to be more towards the middle of the room and in line with a window.

(I’m not completely boring though, just mostly) Still possible though. I say it came though the window to our left hit the side of the couch that was there against the wall and burned.

Me: Luckily the girl who had thrown him over heard a noise. When she awoke she laid there disoriented and scared until she came to enough to recognize the smell of smoke. She then woke up the rest of the family and they were able to put the fire out.

Mom: Sadly the man who started it got the burning tar on his hands. He was horribly scarred and disfigured. The girl did the only thing she could, she forgave him, married him, and loved him forever.

Me: She loved and forgave the physically and mentally scarred man and married him anyway, but the scars on his mind, the deep and insidious damage to his mind. From his difficult childhood, their tumultuous romance and the pain of his injuries continued to resurface. They moved into her house with plans to repair it but he would never let her touch that room. As his delusions grew worse he no longer let her leave the house. It slowly rotted into the ground around them. Their once beautiful love for each other collapsing into a rotting wreck taking them both down with it. Very symbolic all around.

Mom: Sadly their son and his wife bought a house in the country along a beautiful stream, in the hills, peaceful and beautiful. He had become so warped by his parents unhappiness that he lost his mind and, some say, killed his beautiful wife, burying her body in the basement. To this day no one wants to buy as they say it is still haunted by their spirits.

Me: Oh, I remember that one!

Me: (back to the original house) Then many years later the door to the house, normally sealed shut, was found open. Upon searching the house the lifeless body of a homeless man who had sought shelter within was discovered. He lay huddled in the pink room near where the fire had started. An autopsy revealed he had died of smoke inhalation. No new sign of fire was found.