His favorite magazine had a special issue out. Unfortunately his favorite magazine isn’t one that he gets, weird I know, but it is published in England and ridiculously expensive to have shipped over. I proposed a special trip up to Rapid, we could see if any of the stores up there had it in stock and have a nice little road trip. It was time to plant corn and road trips aren’t so nice with the small children. He was sad.

As the week went on everybody online had gotten the magazine with its special toy. They were doing cool things with it. The magazine was completely sold out, there would be no going to Rapid to get it. Copies were selling online for a small fortune, many, many times what it cost new. He read about these things and was sad.

I smiled. I laughed. I rejoiced in his sorrow. Not out of cruelty but because I had a secret. I had called my parents when he started mentioning the special edition, they live near book stores. One of the perks of town life. They stopped in and found only a two month old issue on the shelf. Asking the workers about it they were told that the book store wouldn’t have the new issue in stock for some time to come. European magazines didn’t arrive until much later than their American counter parts. They looked around, it’s a book store, how can anyone not linger? As they reached the doors to leave the helpful worker person ran them down. A new box had just been opened in the back, in it was the new issue of the magazine. They only bought one, in retrospect they should have bought many.

Unable to contain our great secret any longer I told him in time to forestall buying any of the well marked up magazines online. Once the magazine, a box really with stuff and a magazine inside, arrived he and The Goblin Child tore into it. Taking everything out and looking at it then carefully putting it back. Then it sat. It sat through corn planting. It sat through a crazy week at work. It sat and waited for the time to play.

Finally they took it out and put the puzzle together. In a magazine were the components of an AIY (Artificial Intelligence Yourself) kit. “An intelligent device you can talk to.” A cardboard device that uses Google assistant to answer questions. That’s as simple as I can make it. I don’t really understand all his computer stuff, I just know that it’s really cool. To use with one of his many Raspberry Pi’s, that didn’t come with the magazine, it supplied the components, card board box, speaker, push button, voice hat, and microphone board to make this thing.

He and The Goblin Child sat and put it together, they had to wait overnight for the soft wear to download but the next day they were back at it and had a great new toy. T.G.C. loves it and is always thinking of things she wants to ask it. Rosie technically, she decided to name “it” Rosie. Rosie is a little slow to respond with our slightly slow internet, in town she does much better. But even handicapped as she is, she has many of the answers, especially when she can understand what is being asked. Understanding can be a little challenging for her on occasion.

What is the purpose of this you may ask? I don’t have an answer to that, even less than I knew what to call her or explain what came with the magazine. I had to ask for a description. But they are happy and enjoying their new toy, that is all that matters. Thanks mom and dad, you guys are awesome! 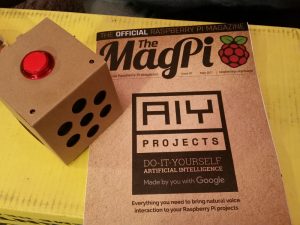 Posted May 23, 2017 by Neversummer in category "Computer", "Goblin Child