This summer, the children and I, painted our back door purple. We loved it. Unfortunately it forced me to really notice the bare rotting wood of the door frame. I had noticed it before and thought about colors but never got to it. We had talked about the sad state of the trim for years. At first, years ago, we wanted to paint the whole house then finish up the trim. But it became apparent that between children and work it was not going to happen. So I decided to paint the trim.

The windows and door in the back of the house went smoothly enough. I looked at all the little windows around the house, sitting at ground level, rotting, and thought that they needed paint the worst. I decided to do the big front windows instead. It was vanity, they are the most visible and I wanted to see them with a pretty purple accent, it would be so pretty.

I got to the first window and started scrapping. The first thing I encountered was a big plug of caulk in one corner. I don’t look up real close at them often, surely we had noticed this but never paid any attention. I started pulling, yanking away at it. It went deep. The plug turned out to be huge. A stop gap fix to a problem, done years ago then left for decades?, that would soon leave a hole through the side of the house if not attended to.

The wood of the trim had long ago rotted. The hole filled with caulk and left. The caulking was not adhered to the frame and caught all the water that ran down the big window, funneling it into the hole it was meant to fix. I pulled until I had to be right behind the drywall in the front room. Once I was no longer pulling loose pieces out the wood was still soft and powdery, in the advanced staged of decay.

I was horrified and didn’t know how to fix it so I did what any intelligent adult would do. I called my dad.

I know not everybody is lucky enough to have a Union* educated Master Carpenter for a father but I am. He knew exactly what to do and gave me careful instructions. The job I did is not up to his standards but the hole is plugged. Hopefully not in a way that keeps making the problem worse this time. It’s sealed up water tight and covered in a few good coats of paint.

Now, this part at least, is finished and my major goal is accomplished before the temps drop lower or snow flies. Almost, I did run into one other problem. 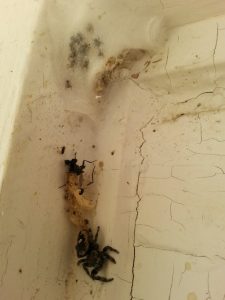 I found this happy little family in the corner of the window as I was cleaning it up for painting. I couldn’t evict them, so there they set. The window is scraped and painted. All except for their corner.

*I’m always horrified when people are anti union. Would they prefer to have there houses built by some uneducated idiot who was flipping hamburgers at McDonalds the day before? Or by someone who is schooled in the trade? On one hand you have to pay a little more, on the other your house falls down within a couple of years. It is especially amusing? frustrating? to hear people who are benefiting from union wages and insurance complain about how they had to pay a little out of their, very good, wages for the privilege. I suppose they would rather not pay dues and be receiving minimum wage instead? Thank you, rant over. Maybe.