We had to go back to eastern Nebraska last weekend. As I was driving on the way home my husband went off about something in the field over there. Did I see it!!
It’s hard to pick something out in a field while speeding down the highway.
Luckily there were no other cars. I managed to spot it.
We discussed if we really could have seen what we thought we thought we saw out there. Just to be sure I flipped around and we went back to look.
Pulling off onto the shoulder we stopped to get a really good look. And some pictures.
It was an elk! A big bull elk. The antlers were clearly visible from the middle of the field where he lay comfortably among a herd of cattle.
We have plenty of elk back here. But to see an elk in the overpopulated civilized eastern half of the state? Ok, maybe more central than eastern. Was he a pet? It seems unlikely but who knows. Was he just wandering through or is there good habitat among the fields and pastures?
No matter what he was fun, and impressive, to see. 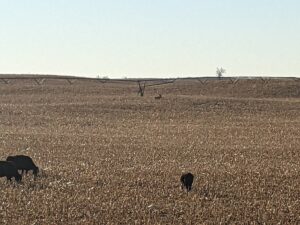