After waiting all night, daylight had finally come. It was time to unload the semis.
Strangely the people working at the elevators want to go home at night. Between that and the worry about working lights on the semis, they have to stop hauling corn over night. After getting the trailers on hand full they were left parked for the night.
Now we could finally haul them in. And hopefully find the missing shoes.
We dug up chicken wire and were hoping no one would be waiting in line as we sifted for shoes and socks.
The same very nice kid was there again today. Kid as in a youngster somewhere in his twenties probably. Maybe thirty. Kids get older as I do. He wasn’t worried at all about finding the shoes. Even less about accidentally running socks through the augers and into the big grain elevators.
They get wrenches and even pry-bars through regularly he said. Those cause some damage, getting stuck in the augers or the conveyor belt. They’ll shut the whole elevator down. Socks are no big deal. Boots will catch for sure in the grate. Don’t worry about sifting through the chicken wire.
My husband and I crouched on the grate watching for shoes. Our son wouldn’t crawl under there but waited to grab them as we handed them out. Our daughter wouldn’t leave the truck. It’s hard to almost b a teenager and have to be embarrassed by everything. We waited, and waited, then waited some more. So much corn came out, could we have missed a boot somewhere? Then with a thump and a pile of grain, one pretty turquoise boot landed on the grate. Slowly all the others followed. From both compartments, no simple searching through one for us. That’s a long time crouched in the corn dust and chaff watching for shoes. Fifty seven some thousand pounds of corn, I checked the ticket. And six shoes buried in there.
We found them! And one sock tucked neatly in its boot. The partner never to be seen again. That poor lonely sock. Is it better to be the one survivor or to pass on with your friends and companions? Who knows what great adventures they will get up to. Eaten by a cow? Hung up for eternity in the grain bins? We can only imagine. 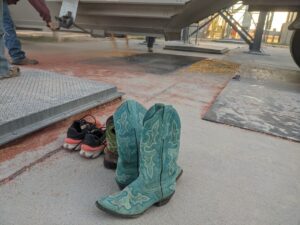