It was just a few calves. Surely we could do it ourselves.

The new bottle calves needed their vaccines. One had been sick since we got him. With care he was feeling better but now a second one was breathing hard. It’s hot and dry out.Nothing is enjoying this weather. Better to prevent any more sick as soon as possible to give the calves the best chance.

In the morning after feeding, while the skies were still over cast, the humidity stifling but the heat not awful yet, we ran the calves into the barn.

The children helped get them in with a combination of luring and pushing, mixed with lots of randomly wandering off in circles or the opposite direction away from calve and shed. In the end we corralled them. They went happily into the alley way and we got to work.

There were spider webs. They strongly dampened one child’s desire to help push calves up the alley into the chute. She said she’d help me up front instead. That was fine, she could give the nasal shot. The prospect of that nearly sent her back down the spider web infested alley. In the end she decided she could handle filling the vaccine guns.

My son didn’t mind spider webs. He was gungho to get those calves up the chute.

He pushed calves. We gave the shots. It was all going very well. He needed a little help once in awhile. The calves were very young and also very quiet. They often didn’t feel the need to move. No problem, I could help out a bit.

As we worked one calf over he wandered out to look at the calves in the pen we were letting them out to. Quickly he returned with wonderful news. I hadn’t made sure all the gates were shut before letting the calves out that way! Oh joy. Only two of the previously worked calves were where they were supposed to be. Luckily one more was only partially out. In the wrong pen, not clear out into the yard. He shut the gates. We continued with the remaining calves.

I pushed the last of the calves into the chute. They were the smallest and wanted to plant front feet which worked very well to hold the firmly in place. My daughter was persuaded to  give the final nasal dose. We were done. Now time to worry about those wandering calves.

Calves got worked and will hopefully stay healthy. That is the least of the days accomplishments. The children got worked and learned some important life lessons. They accomplished a job, a real adult type of job. They each performed a task that they didn’t think they could do, preparing medication and getting calves in. They were out there doing it. Even if working with cattle isn’t something they decide to do for the rest of their lives, these accomplishments are a foundation upon which self sufficiency and confidence are built. Whatever the job that needs done, they are capable of doing it. If they just try. 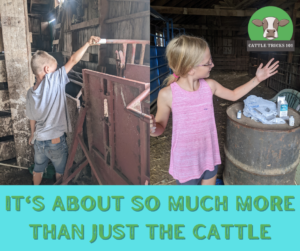