First it was purple now green, I’m working my way through the colors.

Looking through the latest Martha Stewart Living I found an article on growing sprouts and micro greens. It may be a good magazine to replace  Glamor after all.We have been surviving without home grown greens for so long we thought we would experiment with growing these.

So, sure that we would find some use for them, we began our little experiment it will be fun to see what happens.

I have a subscription to Martha Stewart Living now. One of the kids at school was selling subscriptions and I was looking for something to replace Glamor which I am afraid I have finally out grown. The January issue had recipes for roasting vegetables. We still have vegetables from the garden. I thought “Hey, I could roast the vegetables”. It was quite the epiphany.

So I gathered some garlic, an onion, threw in a couple potatoes and we ventured out to the greenhouse to dig up some carrots. We have been sorely lax in our carrot digging this winter. Fortunately the in-laws are making good use of them. They have dug up nearly half. However upon arriving at the purple carrots they seemed unenthused. We found many large purple carrots strewn about the ground. Maybe people don’t share my enthusiasm for purple vegetables? Someday I plan to grow an entirely purple garden. I have seen purple cauliflower (not that I would ever touch the stuff), purple kohlrabi, purple asparagus, purple potatoes, even purple tomatoes. But I digress.

After washing I tossed all the vegetables in olive oil, added a sprinkle of salt and pepper, then spread the larger ones one a cookie sheet. The smaller ones I saved to add later. They roasted for a good hour. The smaller ones half that. The garlic I should of waited until even later to add.

It was scrumptious. The carrots were chewy and sweet. The garlic we added to the mushroom gravy which we poured over the potatoes and our stakes. The whole thing was delicious, it was so nice to be eating from our garden even in the middle of winter. I would like to try some squash this way too, I wish I had been more careful about bringing some inside instead of letting it freeze.

It’s a Beautiful Day in the Neighborhood 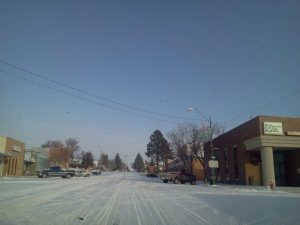 Twenty-seven degrees outside right now according to my computer. We got a light powdery snow last night and now the wind is howling. I understand there was a nice little ground blizzard going on on the way into town today. I suppose all the guys in town will be out plowing snow on their four wheelers.

For once there is stuff going on on the main street cam. What is the main street cam you say? Why it is a service provided by our stellar local computer store/repair shop. A live web cam showing the lively down town. Not that their is usually much to see

Category: Uncategorized | 1 Comment on It’s a Beautiful Day in the Neighborhood

It was one year ago today that my darling husband proposed. He popped the question on bended knee with his Grandmothers ring at the stroke of midnight  so that his words were the first I heard in the new year. It was very romantic.

My how things change.

Not that he’s not still romantic, when he gets the chance. It’s just more difficult with the small goblin child to keep us company. Last year was an extremely busy year with weddings and babies and unfortunately funerals. I think we used up the gift fund at work.

Looking back through the pictures on my camera I found lots of things that I had meant to write about but never found the time. So it looks like I will have something to write about besides poop. It will be fun to revisit summer in the dead of winter. And so I will enjoy writing about……