Things That Go Grrr In The Night

I had forgotten to put a horse away. Again. I do that sometimes, as The Goblin Child would say. When I realized it I was on my way to bed, it was dark and it was raining. So out I went me and my flashlight. The rain was gentle and not too cold. The horse was easily found, huddled against the fence wanting in.

I put him back and turned for my house, wanting back in too. The rain had let up and it was really a beautiful night to be out and about. The frogs were croaking in the distance and the air was still. From across the yard I heard a growl and a snarl and thought about Daisy, wondering what she had cornered now. As I thought that I glanced down at Daisy trotting along next to me. It was one of those times where it takes your brain awhile to catch up with whats going on. I did a double take and realized Daisy hadn’t been doing the growling. Then what had?

My first instinct was to run for the house. So I turned around and turned on my flashlight, shining it in the direction of the noise. Many eyes shown back at me from across the yard. Daisy was running for the house even if I wasn’t. I decided it was best to go with her. 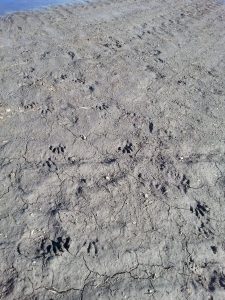