A picture of Nate 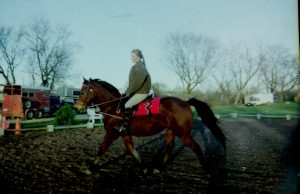 Technically, I have pictures of Nate. Like on paper, back then cameras didn’t hook up to computers. Fortunately mom, probably dad really, had scanned one.  It is amazing looking back at old pictures. I was so young, nineteen maybe? I see the trusty old two horse in the background. It was a good trailer, nice and roomy. It rusted out years ago, fortunately not dropping the horse I was hauling onto the road when the floor detached. And of course Nate is gone.

It is good too though, that things change. I had draw reins on the poor boy. Today I wouldn’t be caught dead with draw reins, or martingales, definitely not tie downs. Any “training device” for that matter other than a light snaffle. For training that is. I would be happy to have a true bridle horse, although I would prefer to go briddleless. Right now I seem to do most of my ridding in a halter, due to laziness really.

The only thing worse than no trainer is a bad trainer. I wanted dressage lessons so badly, the barn I worked at wouldn’t take me seriously because I rode western. So I found this lady. She had Morgans too and traveled the open show circuit giving Morgans a bad name. She immediately put Nate in the draw reins and we trotted endless circles trying to get him to slow down. I did learn a little more about leg yields and the like, haunches in, and good stuff like that.

Now, one good dressage trainer (who took one look at the muscling in his neck and knew he had been ridden in draw reins) and two very good reining trainers later I would love to have him back to try again. I would lose all that stuff on his head and work a lot on flexing and giving to the bit. He worked nicely off your legs, I/we knew that much long before any lessons. Now having felt true collection I look at his nose braced and stuck in the air and cringe even more than I do at my legs stuck out in front of me.

He was a beautiful boy brave and willing. I rode him through downtown Omaha in the River City Round Up parade and down many tricky trails and he always gave his all, and then some. Granted he bashed my knee into a tree at a full gallop, miles from home of course. Leaped a creek at a bad crossing, under a railroad bridge nearly cracking my skull, we spent the rest of the day moving cattle any way. And got covered in blood when he stepped away from a gate, when I grabbed for the reins I drug my wrist across the barb wire slicing it open. Oh, can’t forget the time he went over backwards on my in front of everybody at the endurance ride. My personal favorite was the time he had a nervous breakdown and leaped the creek (different one) with a baby calf on the end of my rope, I dropped my coils and caught my hand in them dislocating every finger on that hand. Someone who thought that they were big and tough and could fix him hoped on. Nate leaped the creek again and kept going breaking the bit in half in his mouth when he jumped the wire gate on the other side.

The one thing all these wrecks have in common? A good, willing, if hot, horse and an ignorant rider. With good training none of that would have caused any problems. Do I know better now? Maybe, I sure hope so. I know I am not near as brave/stupid as I was then. For some reason everything hurts now. None of my recent horses have caused me serious bodily harm though. Maybe someday I will have the chance to try again at the training thing.