Some cows got out this afternoon. Not a big deal but  the father in law stopped to ask if I would help chase them in. Of course I would. As I hopped on the 4wheeler with him I absentmindedly called Daisy to come help. She didn’t come I worried a little then forgot about her amidst the whole cow chasing thing.

8 and I went to pick The Goblin Child up from the bus. Daisy is usually bouncing around wanting to come with. She wasn’t there. Again I remembered that she hadn’t come earlier either. Now I was worried. I tried to remember when I had seen her last. She had come with to feed in the morning.  I couldn’t think of a time I had seen her since then. She couldn’t have not gotten out of the feed truck. Could she?

We had a very little time before the bus would be there, we could make it to check for sure. Barely.

Sure enough. I opened the door and out leapt Daisy. When we get out she will just sit there. She has to be told to come out with us and apparently I didn’t do so. It was dark in the quanset and I was rushing to make it to the bus. I haven’t seen if she did anything to the inside of the feed truck yet. She’s a good dog. I didn’t smell anything. Keeping my fingers crossed that she didn’t hurt anything.

Out at the neighbors driveway that is our compromise meeting place, the bus driver complained about driving clear to our mailbox, I refused to have The Goblin Child unloaded on the highway, we pulled to the side of the road and waited. At the highway two vehicles sat. A car and a pickup. Their people sat on bumpers in between hanging out, talking. The bus managed to squeeze around them and made it up the hill slick with snow and ice.

After unloading the bus went back down the icy hill and waited for room to pull out. The two vehicles still sat, unperturbed by the traffic they were impeding. While loading children I watched a FedEx van pull out from across the street and head down the hill towards the bus. I waited and watched to see if he would slide right into it. He didn’t.

Pulling into our neighbors drive we turned around as usual. Backing out into the road. I put the car in drive, and we went backwards. As usual when things don’t go anywhere near as expected, it took a moment to think it through. I put it back in park and we stopped moving. Back in drive and we slid backwards again. Well, that didn’t work. This time I tried reverse, we were getting quite sideways in the road, maybe I could straighten it out and find some traction further down the hill.

The car straightened. There was no more traction though. A couple more tries and it became apparent that the only way we were going was down the hill. Down to where those two… very nice people still sat. Apparently unaware of the traffic swirling around them, They weren’t bothered at all by blocking half of the road. Easing the car as slow as I could down the slick road I aimed for the sliver highway I could see that was unobstructed. If we could just get to some clear ground and make a run at it we could make the hill.

Of course this whole time the children are sitting, standing, kneeling, spinning circles, and talking loudly in the seat next to me. Of course they weren’t buckled in for the one mile of county road home. Not distracting or impeding my view at all.

I managed not to hit either of the vehicles. The… very nice people sat, still unbothered by how incredibly annoying they were and stared at us as we backed past them. On the cleared pavement of the highway we were able to get started and made it up the hill with no more difficulties. Then finally home. To Daisy. 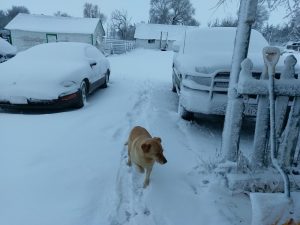