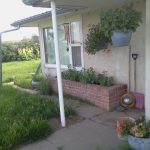 I did it. It was an accident but that doesn’t change the outcome. I took the life of a beautiful living thing.

My flower basket had worms. We discovered them one day. Hundreds of tiny worms devouring one of it’s leaves. I was in a panic, what if they continued to multiply? What if they spread to my other flowers? I picked the leaf off then searched frantically for any other leaves bearing the destructive intruders. Finding a couple of other infected leaves I smashed them under my heel on the sidewalk.

Still worried I wanted something else I could do to prevent further desecration. Vinegar I thought, vinegar cures every thing. So I grabbed my handy dandy spray bottle of vinegar and squirted the flower thoroughly hoping it would kill the bugs. My Mom recommended a systemic bug killer so I picked up a bottle and dispensed it liberally. Shortly there after the plant began to wilt. I poured the water to it thinking it was getting dry like my gigantic flower baskets are prone to do. Nothing helped and I moved the very wilted flower far from the others so it didn’t spread.

I blamed the chemicals I must confess, isn’t that the current mode of society? Chemicals are evil, systemic insecticides are of the devil. Now, much later with the dead browns remains of the formerly glorious flower laying in a heap in the yard my grandmother mentions using vinegar as a weed killer.

“That can’t work” I thought “I just used vinegar to kill bugs on my flower basket”. Oh how the mind hides in denial. Doing some Googling I finally came to grips with the sad truth. I murdered my beautiful plant. This article said it best. Vinegar works by drawing the moisture from the leaves, thus the wilting that no amount of watering would fix. I learned a good lesson the hard way. Next time I will do a little more, any at all, research before I go taking drastic measures. 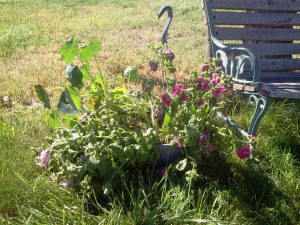