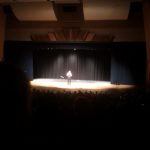 We got to see him last night. He was awesome.

The tickets went on sale Monday and by the time we got ours a couple of days later they were more than half sold and within a few more days he had sold out. The PAC center was packed to the gills. Not too surprising, we knew it was sold out and tried to get there early enough to get good seats. Everybody else had the same idea apparently. The closest parking was a block away and most of the seats were full when we arrived. And Baxter was on stage checking the microphones. We got to enjoy him for a few extra minuets, not as long as earlier arrivals got but still it was fun.

We are told that this may be his last year touring, obviously not his last show as some people are saying I checked out his calendar and he is one busy man, if so we were lucky to get to see such a great performer one last time. I laughed so hard I thought my belly was going to burst. Literally, I thought the kid might fall out. At one point he did try to crawl out my belly button. My stomach hurt and I laid a hand on it only to discover an elbow? or some such protruding point sticking out of my belly button. It was a bit distracting. By the time I got my husband to feel it he had moved again and I went back to merely having an outty.

He talked about friends he had in the area, a vacation to Car Hinge, cows horses and cowboys and told the story about how to tell a header from a heeler. I was so glad he did I had been trying to tell my non horsey husband about it for a while now. His brother-in-law is a team roper and a header and he so completely fits the description.

Sore from laughing so hard and exhausted from being up so far past our bed time we stumbled out of the theater shortly after ten. After a quick stop at McDonald’s for ice cream we started the long drive home.  It was after ten Dairy Queen was closed, McDonald’s wasn’t bad though.

He closed with this one:

The Goblin Child and I went in to see her doting father for lunch today. The morning had been warm and sunny, clear up in the thirties. As we headed out the door I bundled us up in a sweat shirt, for me, and a darling vest the child got for Christmas, for her. I had a brief moment of worry as we walked out the door as to whether I should bring warmer clothes but shrugged it off as too much work. It had been a pretty good struggle to get ready  already and I just wanted to get going.

As we got to town a few light snow flakes began to fall. Eating lunch we could see the snow barreling past the windows but dismissed it as mostly wind and soon to pass. After time spent visiting and hanging out the announcement came that school was canceled for the rest of the day. A bit of an over reaction surely.

We waited for the kids to get out of there and for my hard working husband to finish a couple of things up so he could follow us home. Bundling the child in a blanket to help keep her warm, I made sure the straps of her car seat were fit just right and we headed off into the storm. Town wasn’t bad, the children let out of school early so they could get home to safety were out spinning cookies in the roads. We managed to avoid them.

The wind howled across the highway pushing the powdery snow ahead of us. At times the faint glow if the blazers tail lights ahead of us was all I could see. Staying at low speeds the road didn’t feel bad but I was happy to have brought the pickup instead of trying to get the snowed in car out for what would’ve been the first time in weeks.

Break lights lit up ahead of me. Cars were parked along the side of the road. We slowed even further and gawked at the Toyota pickup in the ditch. With a U-Haul trailer on behind, it was facing north in the south bound ditch nearly to the fence line with snow pushed ahead of it nearly over the hood. Two cars were already stopped with them parked on the road, headlights shinning to alert traffic. My much beloved pickup could probably have helped pull them out, or I could have a little too much confidence in the old girl, but I am pregnant (the excuse I use for anything I don’t want to do and no reason for me not to do anything when other people try to use it to talk sense into me), the child was asleep and really how did they manage something like that anyway? Silly people if they would just slow down, probably from Colorado. We went on home.

I put it in four wheel drive as we pulled onto the county road. Snow drifts had already covered the road before this latest onslaught. Leaving the shelter of the trees along the highway visibility immediately dropped to nothing. Creeping along I could peer over the hood and make out the road directly under the bumper. My phone rang. It was my husband no longer visible in front of me. What better to do when driving in a white out than talk on the phone? I couldn’t think of anything so we talked. He said to watch for the fence lines on either side and try to stay centered. It worked for the most part until the wind driven snow obscured even them from view.

Turning south down the driveway between open wheat fields I realized that the small difficulties that came before were nothing. With no markers to follow on either side and the roadway, already white and covered with snow, finding the path was a matter of memory and feel. The piles of snow already plowed to the sides of the road gave the tires something to bounce off of putting us back on the proper path. We found our way home though and stayed put.

Which is not necessarily a good thing.

We, or at least I, enjoyed Christmas break immensely. One of my multi-talented, hard working husbands many jobs is in town at the local school from which he gets the same break the kids do. We have loved having him home a little more often than usual. His other job is working here on the farm, he doesn’t get days off from that one.

We got used to sleeping late and eating lunch at home. Unfortunately everybody got sick, but it was nice that my poor sick husband didn’t have to go into work all day. Instead he only had to go feed every morning in the sub zero temperatures and work on “stuff” outside. I really don’t know what they were doing out there in the cold all morning, I was not going out in that miserable cold to see. He might have preferred to be at his job in town, at least it would have been inside where it was warm.

I offered to go feed for him a couple of times but the weather was so bad I wasn’t sure that we would be able to get to town should something untoward happen. In the end I sat inside where it was warm and relatively safe with the child and let him freeze.

The weather was awful most of the time. Besides cold we got lots of snow. Walking across our yard the snow is high enough to fill winter boots. When it got done blowing and drifting from one direction it would switch and blow new drifts in another direction. By the time we fought our way out Sunday the drive way had been dug out multiple times and the road was blown over.

Today it was my job to help feed again. I’m sure my father-in-law is as sad as I to see his son back at work, he is far better help at feeding than I am. I am not only not as competent as he but unwilling to spend a whole morning out in the cold working on things and hugely pregnant as well as toting one child along with me already which excuses me from many little tasks. My poor father-in-law is reduced to getting gates and such.

The Goblin Child lived up to her name trying to get dressed for the bone chilling cold. She has gotten used to being excused from feeding by crying and refusing to set foot outside. Today she had no choice. She’s not quite old enough to stay home alone and I had to go feed. She cried and pushed clothes off as fast as I could get them on her. Faster probably I wasn’t having much luck. Until I held her up to see the pay-loader out the window. Then she cried because she wanted to see out some more.

By the time we got to the feed truck she was a little more enthused. And once the handheld radio started talking she was really getting into it. Driving the truck with her tuck up tight against my arm is not the easiest thing, we go pretty slow. She sat with the radio in her lap perfectly still until her papas voice came through with instructions. She would jump and start whoaing and wowing, often making the instructions a little hard to hear. I showed her how to push the little button and she had a blast talking to papa.

Hopefully she enjoyed it enough that tomorrow it wont be as much of a fight to get out of the house.