You should definitely fear the penguin. 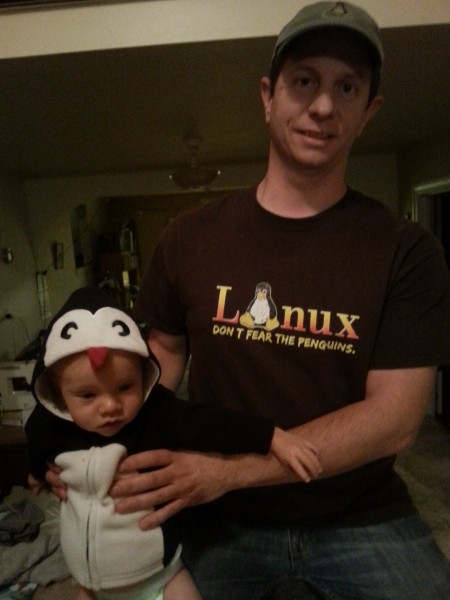 So anybody else can stop reading now. Or not.

Thank you Grandma. Wish that we were trick or treating at your house for real but this is second best. Happy Halloween!

Speaking of my Mother

I was looking for pictures of my mom on a horse and could find surprisingly few. It dawned on me that it was because she was always busy getting us on horses. And maybe that growing up she was the adult with the camera but I had fun looking. Here’s what I found and the few she has sent me:

All it means is letting them feed themselves. With real food not baby food.

We are trying this very happily with 8. Not exactly as prescribed by the experts. I never follow instructions exactly. The instructions say to let them feed themselves completely. We can’t quite handle the mess. So we help him with the worst of it. He also gets a sippy cup with of yogurt, he loves vanilla wont eat plain,when mixed with ground peaches it’s all I can do not to steal it from him, for him to feed himself with. Anything to avoid having to spoon feed.

He loves graham crackers, watermelon, bananas and spaghetti. Steamed carrot sticks were a mixed success. He likes them but even knowing that they needed steamed for a ridiculously long time I didn’t steam them long enough and they are a bit much for him to gnaw through. The hard crust of french bread will keep him occupied endlessly. Corned beef and cabbage is a surprisingly good baby food and I hope to put on a stew this week. Full of carrots, potatoes and meat and cooked till soft and mushy it may not sound tasty but it’s perfect for him.

I knew it as soon as they announced the autumnal equinox on the 23rd. I have a feeling for these things ya know. I am so in the mood for fall! It is my favorite time of year what with the colors, the pumpkins and the cool crisp fall air.

Have I Mentioned That My Mom Is Awesome? 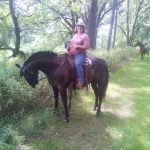 The woman that taught me to ride attended another horse show this weekend with her trusty steed, Smoke.

Smoke is an interesting and unique horse. He definitely has a mind of his own and strong opinions on everything. A Rocky Mountain cross, orphaned at birth, he was hand raised and spoiled rotten when she got him. He used to run over anyone in his path and refuse to give to any pressure short of a beating. Now he is a trusty, overly intelligent, fun horse to ride. She’s brought him a long ways.

With this horse, who has to be convinced that he should do anything anyone asks, she/they placed in every class they entered. He blew away the gaited horses to win the fast walk race. We will give him almost all the credit on that one, he’s a speedy little guy.

They conquered the obstacle class. Performing each task without difficulty from gates and bridges, to tarps, to the “car wash” that always looks terrifying and fascinating to me.

They gave away flag race. Although sitting easy in first mom has always hated going fast. She decided it wasn’t worth it and graciously allowed the other team to win.

In every class they entered Smoke showed the excellent training she has put into him as well as his quirky personality. He stepped back to politely  allow the other horse to win at musical, not chairs but whatever it would be with horses. Mom threw a couple of other classes when speed was called for to eliminate the top contenders, again she doesn’t like to go fast.

This is hardly the first time for them. If I recollect correctly she won the last show they went to also. A dressage trail clinic I think? Followed by a schooling show to see if they were paying attention. They beat all the full time students of the trainer putting on the show. She will of course deny their greatness but we know better.

The first picture is not Smoke of course but I seem to be a little short of pictures of those two. Sadly we don’t have any pictures of them showing.

I have been decidedly lazy in my posting lately. Partially because it’s summer, that means incredibly busy even without a small child. Add him to the pile and it really gets crazy. And partially because of the small child. Although it would be unfair to blame every difficulty in life on poor little 8 this one is definitely his fault. He may have began his life as a good sleeper but those days are long over.

It has reached a point where if he is only up two or three times a night I consider it a good night and last nights six whole hours of sleep leaves me better rested than I have been in days. I think he’s doing better or it could be that my already over worked husband is taking some of the night watch, hence the good nights sleep for me last night if not him.

It’s hard to put thoughts together enough to write when I am barely able to function but I am determined, both to write and that he shall sleep.

To Grandmothers House We Go!

Ok, not to her house but we did get to see her or them. The grandmas as we lovingly call them. And what a delight it was. The Goblin Child and 8 are both crazy about them and, if my eighty year old grandmother bouncing around and giggling like a little kid is anything to judge by, the feeling is returned.

The Goblin Childs best buddy and his family came along. They sat in the back seat together and played and watched movies. The two younger children didn’t get to have near as much fun but all in all they took the long drive much better than expected.

I feel girls should be able to do (almost) anything boys can do. Whether they choose to or not. Just as Boys should be able to do, supposedly, girly things. We try to do as we preach so we are starting The Goblin Child out early. Not only should everyone know how to drive a stick shift, she will have to work more on this lesson when her legs get longer, being able to drive a semi never hurts.

She enjoys practicing. I think. It could just be the horn she likes.

Hauling hay is a family affair. The cousins come along and play in the sleeper and take rides in the payloader. Bouncing across the hay field makes for some surprisingly good naps too.

I see that my last post was about how hot it was. All we hear, on what little news we hear, is how hot and dry this summer is and the fires. So I guess/realize how lucky we are but still a genuine freeze in August?

We haven’t talked to anyone whose thermometer read below thirty five. And these are farmers, they take their weather watching seriously. That seems a little warm for frost. Between that and the short duration of the freeze hopefully that kept it from being a killing frost and the crops in the field fared as well as the garden. It was already a bad year this doesn’t help.