That was at eight this morning, by the time I sit to write this it has warmed up to fifteen or twelve below depending on the source. It was kind of fun at first, a bit of an adventure, but now I am sick and tired of it. When I went out to take care of the horses and chickens the air was to cold to breath, burning nose and lungs with each inhalation. Why was I taking care of the horses? They live happily outside with their round bale and heated waterer, it can’t get any lower maintenance than that. Well other than giving them some grain in this miserable weather they wouldn’t need anything except…… 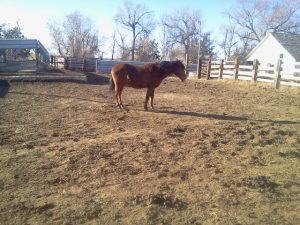 We are trying out a new horse. Yes, a new horse. After looking high and low and mostly just for the fun of it one was dropped into my lap. I always figure that is how horses should be found. One should put in the effort, or not sometimes, and God will surprise you with what you actually need, not what you think you want.

I had decided to buy a cow, still working on that but that’s a different story, and was looking through Craigslist comparing prices and seeing what was out there. Sale barns are so difficult with a large, energetic child, we are going to do it though once the big bred cow sales start, maybe.

Anyway I was looking for cows in the Rapid City Craigslist and came across an add for an old short Peruvian Paso gelding just the other side of Chadron. I always think the Pasos move so funny, the regular riding type less so than the show horses. They are incredibly smooth though. I called. We looked. He is definitely built like a Paso with the weird butt. His legs are much lighter boned than I would like, but they have carried him soundly to twenty. He seemed perfect, zippy and responsive we had brought the trailer along it was a done deal.

Until he crow-hopped with me when I asked him for a little speed. Not a trot he doesn’t trot, very cool and smooth. That was it I said no. I wanted a very quiet well behaved horse that a small child would be safe on. She swore up and down that he doesn’t do that, that he is a safe dependable horse, a confidence builder she said. Then she offered to let us take him home for a trial. My non-horse person husband liked him and wanted to try it, so we brought him home.

I got to ride him for a couple of days before the weather turned so miserable. He is very zippy, speeds all over the place in that wonderful Paso gait, and is very light in the face. He neck reins wonderfully which is lucky since he has no clue what legs mean. I guess most people ride that way, reins only no legs, but I tend to ignore the reins and use my legs to steer. This is a bit of an adjustment for me but could be good for a small child whose legs don’t reach. If we decide to keep him, which seems likely I’m rather fond of the little guy, I will have a good year at least to make positively sure that he is trust worthy  and teach him things like stepping over to the fence for mounting, can’t live without that one even if he is thirteen hands. Need to make sure that he ponies quietly too and knows how to get gates.

Until then, I turned him in with the other two and they don’t get along. Not a surprise, Coyote hates everybody. So I am taking him extra grain, more than the other two are getting, and locking the two meanies out of the hay to make sure he is getting enough. I hate for him to be short any hay at all in this terrible cold weather.  I worry so much because of his age, I know they can go into their thirties but I have never had one make it past twenty. 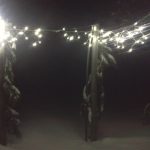 This cold snap is particularly miserable. After originally calling for a late start yesterday they decided to call school off altogether. We got well over the predicted one to two inches the day before and it was cold. I had been worried about chores in the bone chilling cold with the child along and was very relieved to have my hard working husband do the feeding for me. Only because of my concerns for the child not because I didn’t want to go outside, of course not.

It was such a pleasant treat to have my often absent husband home for, almost, a whole day. We Played with the stir crazy child, played on the computers, and watched movies. I didn’t get a drop of work done. It was a vacation in and of its self, he’s never going to believe that I usually get stuff done while he’s at work.

We have been working our way through some of the great Christmas classics this year. So many different versions of A Christmas Carol, the muppets, one with Patrick Stewart, a 1951 version, and of course Jim Carreys take on it. All amazingly good, if some of them are a bit corny. I think Jim Carrey is the best of the bunch.

My favorites though are the old, old classics, not that Dickens is in any way modern. I cried through It’s a Wonderful Life last night after mocking it for so long. Guess you really should try it before you knock it. What an incredible movie. Miracle on 34th st was very good ( the 1947 version, I didn’t know there was a ’94 version and I don’t think I want to try it ) but didn’t quite come close. I’m afraid I am developing a slight crush on Bing Crosby, after White Christmas and Holiday Inn. I think it’s because my dashing, debonair husband has the looks of Bing, of course he also has the heart of George Baily (Wonderful Life). Christmas movies are great, but we are saving the best for last. If not on Christmas eve this year, we are going to watch A Christmas Story closer to Christmas at least.

All this cold weather does have its down side of course. Last night in the middle of the night at 15 degrees below zero the power went out. We brought the child to bed with us to keep us all warmer. We let the cat in off of the back porch and tried to coax the dog in from off the couch, she did not want to join us. As it grew colder, even despite our cuddling, my poor husband braved the cold to head outside and dig out a generator. We have a big old monstrosity of a gas heater, that I love, but it needs power to the thermostat to run. The generator kept the heater going until it ran out of gas. There is a gas tank here on the place of course but it has an electric pump. By then The Goblin Child had finally settled in and stopped crying so we left it and managed not to freeze and even get a little sleep until power came back on about six.

Still at around 8 below my husband, very disappointed that there was no late start today, called in his own late start and did the feeding, with lots of ice chopping thrown for good measure, for me again today.

Of Cows and Snow

It is snowing, again.

That seems to be the trend this winter, periods of snow and bitter cold interspersed with beautiful warm weather. No recent snow has topped that first one, fortunately. We are, hopefully, finished with cows, all but for the feeding of. After the last snow we, the guys and Cowboy Bill, got to wean calves. I had to stay in the house and watch The Goblin Child, dang what a shame.

The next day in what was supposed to have been forty degree weather we, me included, brought the last of the cattle home from summer pasture. Thanks to my loving husband and trainer extraordinaire Paula I got to take a horse!!  I invited Paula because she lives next door to the pasture and I thought she would enjoy a cow moving with such a short drive, next door is all relative of course. She offered to drive clear down and pick me and a horse up and then drive clear back. The hope had been that with the nice weather the child could ride on the four wheeler in front of her father. It was nineteen degrees that morning. So much for planning. My cow hating husband volunteered to wait in the pick up with the child, such sacrifice.

We, I at least, had a blast. Coyote thinks he’s a four wheeler anyway and with the very brisk morning he was off and going. I meant to ask Paula if the blistering pace, I think Coyotes fastest trot counts as blistering, was all right for her but he was already going and she starts colts I figured she would think the question was silly. It was to cold to bother with bits, I rode in my halter and she in a hack, slowing wasn’t much of an option anyway.

The plan was to drive them down the road to a neighbors corrals where they would be loaded on the semis to haul them home. I was all for driving them the whole way but nobody else wanted to push cattle all day in strong wind and  twenty degree weather, it had warmed up considerably by then.

The cattle came in easy and the short drive down the road to corrals was cold but pleasant. The one thing Coyote enjoys in life is chasing cows, he is so fun to ride. On arrival at the corrals I found my hard working husband standing by the pick up door keeping an eye on The Goblin Child as she played joyously at the wheel pushing every button and pulling levers.

As soon as we left to gather the cattle the owner of the borrowed corrals had arrived with a load of panels that needed set up to make the corrals functional. Waiting behind in the pick up my child watching husband was the only one available to help. The work involved in the cattle and watching the child at the same time can be difficult to manage. Trying to do everything at once, he left the child playing in the pick up, parked right next to where he was working so he could keep an eye on her while she stayed warm.

It worked nicely until he came to retrieve her. In her button pushing she had locked the doors. In his rush to get all the work done he had forgotten the keys in the ignition, so there they sat. I got to continue playing with the cattle, helping load the semi’s, while he watched her and waited for different set of keys to be brought. All in all it was a good day and we got to hear everybody elses story of the time they lock their child in the car.